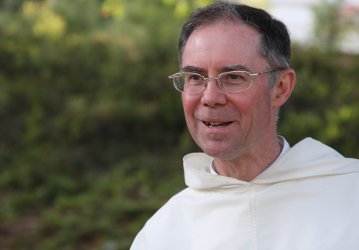 Born and raised in the small Northern California town of Dixon, just outside of the state’s capital of Sacramento, Rev. Paul Raftery, O.P., attended public schools through the twelfth grade. The Faith, however, was always foremost in his heart and mind. After attending the University of California, Davis, for a couple of years, he began to consider a vocation to the priesthood and religious life. He investigated a number of orders, but in talking with and receiving encouragement from his uncle, a Dominican priest, he decided to enter the Order of Preachers.

Fr. Paul earned a Masters of Divinity degree at St. Albert’s College, commonly known as the Dominican School of Philosophy and Theology, in Oakland, California, and was ordained to the priesthood in 1984. His first two assignments were at Newman Centers on the campuses of the University of Arizona in Tucson and the University of Oregon in Eugene. He then began an extended period of parish work in Portland, Oregon, and in Northern California. In 1998 he earned a licentiate degree in the history of liturgy at the Jesuit School of Theology in Berkeley.

Fr. Paul first heard about Thomas Aquinas College early in his priesthood. “When I was a student at St. Albert’s, I read about the College in Christopher Derrick’s book, Escape from Scepticism,” he says. “I also read the Blue Book,” the College’s founding document. While serving as an associate at St. Dominic’s Catholic Church in Eagle Rock, California, in 2004, he became the chaplain for the College’s chapter of Third Order Dominicans. Around that time the College began searching for another chaplain, and in 2006 Fr. Paul officially assumed that position. He served at the College for six years before departing in 2012 to become the parochial vicar of Holy Family Cathedral in Anchorage, Alaska. Much to the delight of the entire community, he returned to the College as a chaplain in the summer of 2014 and now serves as head chaplain and assistant to the dean for religious affairs

“I find the College to be a wonderful environment for coming to know God at the level of His natural revelation through the great books curriculum,” says Fr. Paul. “The program is all so wonderfully ordered to and in harmony with the study of the Faith.”

Having a keen interest in Gregorian chant, he is delighted with the College’s Chant Schola that enhances the liturgical life on campus. An avid hiker, Fr. Paul also enjoys the trails and the natural beauty of the Los Padres National Forest above the campus. “I like to get together with some students,” he explains, “and walk down a trail so I can just be in their presence and share in their lives.”