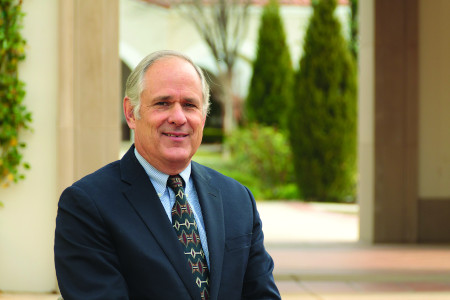 When he was a student at Thomas Aquinas College in the late early 1980s, Thomas J. Kaiser was most interested in philosophy and theology, especially the philosophy of nature. “I was struck by how important the study of nature was for doing theology,” he said. “That nature acts for an end is most evident in living things. This teleological framework, of course, points to God. I find now even as a tutor that principles we face in the lab are often brought to bear in theology.”

Tom was interested in nature growing up in Bakersfield, Calif. When he wasn’t out playing sports, he would be found checking out the habitats of birds and mammals along the banks and open country of the Kern River near his home. He became interested in falconry when he was 13 and maintains that interest today. “I hated biology in high school,” he said. “We never saw a single living organism. We were always pulling one out of formaldehyde.”

Tom was so enamored of his experience at the College that, after he graduated in 1975, he thought he might like to come back and teach. After a misspent semester studying philosophy in the East, he began taking some undergraduate courses in biology at California State University, Bakersfield, and worked at a cotton research station run by the University of California, Davis. He also spoke with College founders Dr. Ronald P. McArthur and Marcus R. Berquist, and discussed getting a doctorate in biology, then returning to the College to teach. None of the tutors as yet had expertise in that area.

On their encouragement, Tom then applied for and was accepted into the doctoral program in biology at the University of California, Los Angeles. He completed his coursework in 1982 and obtained his doctorate in 1986. His dissertation, “The Behavior and Energetics of Prairie Falcons Breeding in the Western Mojave Desert,” was a groundbreaking study in energetic efficiency that confirmed a hypothesis of why certain female falcons are larger than males.

Dr. Kaiser returned to the College to teach in 1982 and began to help overhaul the laboratory and science curriculum for the freshmen and sophomore years. He introduced a more complete program of biology, still starting with J. Henri Fabre and asking “Where is the proper place to begin the study of biology?” He recommended expanding readings in Harvey and Galen (to discuss anatomy and physiology, the motion of the heart and blood, and animal generation), Linnaeus (to discuss the naming and classification of organisms), Driesch (to discuss embryology and vitalistic theories), Goethe (to discuss the metamorphosis of plants), and Aristotle (to discuss the principles and methods of science). He also recommended field trips to examine and collect insects, class dissection of a sheep heart, and lab exercises in embryology and plant anatomy. The faculty adopted his recommendations.

“Our students get exposed to the most important questions raised in the study of biology,” says Dr. Kaiser. “Basically, there are two competing views of biology today: the Materialist approach and the Teleological approach. In your average biology course, the philosophy of nature is never discussed, but all of the assumptions are still there and everything will be taught in light of those assumptions. These views come up over and over again and our students get to see the consequences of holding one view over another. ”

“This is why a good science program is indispensable to a good liberal arts program. It’s sorely neglected elsewhere. You don’t generally see liberal arts schools erecting science buildings these days. But we really want to emphasize the importance of good science to the intellectual life. The connection between natural science and philosophy must be understood before one can fully appreciate the connection between faith and reason.”

Dr. Kaiser married his classmate Paula Grimm, and they have raised 11 children together. If you wander out back behind the Kaiser homestead in Upper Ojai, you will find them raising at any given time falcons, hawks, pigeons, pheasants, quail, ducks, chukars, cockatoos, dogs, rabbits, and various reptiles. For Dr. Kaiser, these creatures are all reminders of God’s presence around him.