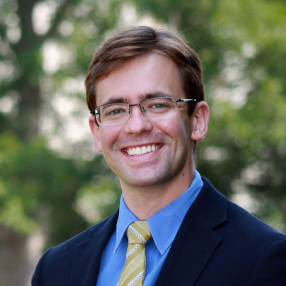 Growing up in Fredericksburg, Virginia, Michael Rubin considered himself a poor math student and had little interest in the subject. His mother knew why.

“I think you can do better,” she would say. “It’s just that you’re not checking your work!” So, when she home-schooled him for a year in middle school, she “very lovingly forced me to go over my work with a fine-tooth comb,” Dr. Rubin recalls. The discipline paid off. “Suddenly I discovered that, when I put in the effort to do it right, I did really well,” he says. “And I discovered that I loved math: the knowledge that you get from it, being able to know something with total certainty, and the beauty in seeing how things have an exact proportion.”

Dr. Rubin’s zeal for mathematics led to a love for philosophy: “I enjoyed proving things, reasoning, figuring things out.” So as an undergraduate at Providence College, he majored in both. Yet when he had to choose between the two, he opted for philosophy, going on to earn master’s and doctoral degrees at the Catholic University of America. While there, and in a one-year assignment at Christendom College, he taught philosophy to undergraduates, but found the idea of being limited to a single discipline “depressing.”

He is therefore delighted that, as a member of the Thomas Aquinas College teaching faculty, he is required to teach across the curriculum. This year he is teaching Sophomore Natural Science, Freshman Theology, and Sophomore Philosophy. “I have always had a deep desire to know, as much as possible, the things that are worth knowing,” Dr. Rubin says. “Here that is not a problem! The program itself encourages tutors and students alike to always be learning.”