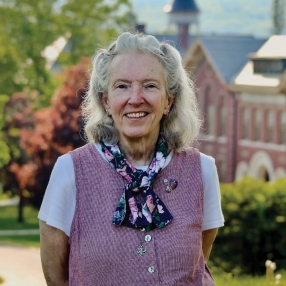 “It’s miraculous,” says Dr. Nancy Faller of the journey that brought her from an evacuation hospital in Vietnam to the fullness of the Catholic faith and then — 25 years later — to Thomas Aquinas College.

“Nurse Nancy,” as she is known, is a beloved presence on the New England campus, where she tends to students’ medical needs. She is also a member of the President’s Council, the faithful society of friends, each giving at least $1,000 a year, who provide the backbone of support to the College’s Annual Fund. Yet she would likely be neither the campus nurse nor a College benefactor — nor even a practicing Catholic — were it not for a providential encounter with a blinded American soldier in Qui Nhơn in 1970.

The story begins several years earlier, when Dr. Faller, one of eight children in a Catholic family from Carlisle, Pennsylvania, applied for an Army nursing scholarship, never imagining that, by the time she graduated from St. Joseph’s College in 1968, the U.S. would be embroiled in a rapidly escalating war in Vietnam. Eighteen months after her graduation, she was the night supervisor in the Army’s 67th Evacuation Hospital, located at the end of a runway on the edge of the South China Sea.

Among the many wounded soldiers Dr. Faller treated were a few whose names she would never forget. One was Sgt. David Rioux (’75), a native of Maine serving in the 101st Airborne Division who was blinded and critically injured by a mortar rigged to a tripwire. “He was there a long time, so everybody remembered him,” says Dr. Faller. “I even know what bed he was in; he was in the fourth bed from the end on the right-hand side.”

Within a year of returning stateside, Sgt. Rioux enrolled as a member of the inaugural class at Thomas Aquinas College. “There was an organization, Recording for the Blind, which would put books on reel-to-reel tapes,” he recalls. “Once I had the recordings I needed for the curriculum, the rest was memory.” After graduating in 1975, he went on to earn both master’s and doctoral degrees in philosophy at the Université Laval in Quebec.

Dr. Faller, meanwhile, became an accomplished nurse and published expert in WOC (Wound, Ostomy, and Continence) Nursing, eventually earning a master’s degree from Russell Sage College and a doctorate in nursing from the University of Massachusetts. Yet her faith had waned. “When I went to nursing conferences all over the world — Africa, Australia, Europe, Asia, South America — I never went to Mass on Sunday,” she admits. “I lived a fairly dissolute life. Anything you can do wrong in the Ten Commandments, I’d been there, done that.”

Then providence intervened. In 1995, while working with another visually impaired veteran from New England, Dr. Faller decided, “totally out of the blue,” to inquire about the blinded Maine native she remembered from 25 years earlier in Qui Nhơn. “I wrote David’s name down on a piece of paper, and I said, ‘Ask the people at the VA blind program whether they know him.’”

Within months, Doctors Faller and Rioux were pen pals. “He would send me letters that were typed on his computer using the Flipper screen-reader,” she reminisces, “and I would send him audiotaped letters.” Their missives covered a wide range of topics, including faith. During one exchange, Dr. Rioux remarked that “Catholicism is the flower of Christianity” — a passing comment with eternal consequences.

“In that one instant,” Dr. Faller observes, “I knew what the Catholic Church is, what it teaches; everything is true. I went to Confession, and started going to Mass every day after that. My whole life changed.” Says Dr. Rioux, modestly, “Sometimes, the Holy Spirit uses the things we say to make things happen.”

In the years to follow, Dr. Faller took up residence in Turners Falls, Massachusetts, and, in no small part because of Dr. Rioux, became an admirer and benefactor of Thomas Aquinas College. In 2007, when a prep school tried to sell its campus in nearby Northfield (price: $60 million), she and some friends began praying the Rosary for the property to somehow come into the College’s possession.

Ten years later, those prayers were answered when, through the largesse of the National Christian Foundation, the campus became the home of Thomas Aquinas College, New England. Dr. Faller began attending daily Mass in Our Mother of Perpetual Help Chapel, after which, one Saturday last summer, Dean Tom Kaiser approached her in his golf cart.

“You’re a nurse!” he exclaimed. “Do you want a job?” Dr. Faller was delighted: “You’re asking me if I want to work here? Of course, I would love to!” Without a second thought, she set up an infirmary in Gould Hall.

“Let’s face it, she’s massively overqualified to be a campus nurse, but that doesn’t matter,” says Dr. Rioux. “Her enthusiasm and love for the College are unlimited. It combines two things that she loves: the life of the mind and the life of the Faith. It’s the perfect place for her to be, and she can contribute a great deal.”

In addition to lending her professional expertise, Nurse Nancy contributes as a member of the President’s Council, having gifted the College with the nontaxable assets of an IRA account in 2020. “Working at the school, I wanted to do something for the Chapel,” she says, noting that her gift has been dedicated to that purpose. “I can’t think of any place I’d rather work or support.”

And what better way to commemorate two meaningful anniversaries? In 2020 it was exactly 25 years since Doctors Faller and Rioux reacquainted — and 50 since their lives crossed paths at that evacuation hospital in Vietnam.