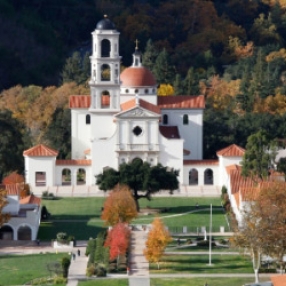 Beyond the rarified air of academic pursuits lie buildings, grounds, and concrete things. That’s the world of Tom Mellein, who ensures that abstract classroom discussions can exist by keeping physical plant operations in order.

In recognition of the level of responsibility he has and of his dedication to the College, Mr. Mellein was promoted to the position of Facilities Manager in 1999. Under the polity of the College, this position makes Mr. Mellein a member of the faculty. “His good judgment about so many things is particularly valued here at the College,” says Vice President for Finance and Administration Peter DeLuca. “This appointment gives appropriate recognition to all Tom does to make this College possible.”

Mr. Mellein came to the College in 1983, after having come to know various families of the College through parish life in nearby Ojai. “I was very happy working in an electrical shop with my father-in-law, but Norm DeSilva (who was then a tutor, but who later died of brain cancer) kept urging me to come work here. I eventually did, and I really can’t convey the gratitude I have for the College and for what it’s done for me and my family,” he says. “I’m still thankful to Norm, and feel his presence here every day.”

Mr. Mellein, who grew up in Ojai as the fifth of 14 children, now has ten children of his own (four boys and six girls). He directs a staff of three full-time employees and, through them, a crew of more than 60 part-time student workers. He manages everything from building and grounds maintenance to government inspections for environmental health, fire and safety, and sanitation. He supervises the work of numerous outside contractors and is the College’s on-site representative for the construction of new buildings.

More than once has he been tempted with the lure of other lucrative job offers, including one to be a building manager for Paramount Studios, but he turned them down. “I’d be richer, but I wouldn’t be happier,” he says.

But as valued as he is to the physical aspect of the campus, so also is he valued to the many students with whom he comes in contact and who look to him as their mentor. “I’ve been so fortunate to see so many great things happen in the lives of students here,” he says. “A lot of them come in as freshman and are away from home for the first time. I try to tell them what a great gift their parents have given them and how fortunate they are to be here. You find that you have a lot of great opportunities to give helpful advice.”