Felix S. McGinnis, Jr., was involved with Thomas Aquinas College from almost the very beginning. He joined the Board of Governors in 1974 and served on it until his retirement in 2001, at which point, by resolution of his erstwhile colleagues, he was granted emeritus status in honor of his many years of exemplary work.

Mr. McGinnis was the President of the Leonardt Foundation of Los Angeles, a charitable foundation that provides assistance to various hospitals, colleges, universities, clinics, and homes for the aged. Involved with the foundation since the 1950s, he joined it fulltime in the 1970s after 25 years with Southwestern Portland Cement Co.

Mr. McGinnis was born in Los Angeles in 1918, but grew up in San Francisco, where he attended St. Ignatius High School. He later attended the University of San Francisco, where he received a degree in chemistry in 1940. He was a Knight of Malta, a Knight of the Holy Sepulchre, and a Knight of St. Gregory. He also served on the advisory board of the Los Angeles (Maryvale) Orphanage and as a director of International Life Services.

Mr. McGinnis passed away on April 13, 2011. He is survived by his wife of 62 years, Barbara, and their two children and six grandchildren. One of their children, Felix McGinnis III, graduated from Thomas Aquinas College in 1984.

“I became an early supporter of Thomas Aquinas College,” McGinnis once said, “because I could see it was offering a clear, sound, Christian education of exceptional quality that was aimed toward truth — something that was, and is, in great contrast to the confusion elsewhere in American higher education. It’s been a pleasure to see it flourish over the years and I’ve been privileged to be a part of it.” 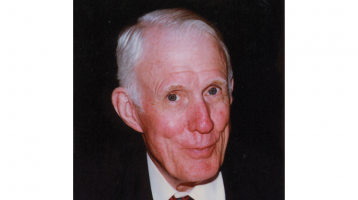