Learning at Thomas Aquinas College is geared toward the education of the whole person, and as such it is not limited to the confines of the classroom. The Socratic discussions that begin in class spill into the dining commons, the arcades, and pathways, and the residence halls. Concerts and lectures are held on campus throughout the year. The Faith, which informs all classroom learning, manifests itself in every other facet of campus living as well, from daily Mass and adoration to evening rosary and processions. Students can also refresh their minds, their bodies, and their souls through a number of extracurricular activities.

Chief among these are the College’s music, theater, and sports programs, but there are others as well. On both campuses, the College employs two student athletic directors, who organize the intramural sports schedule throughout the year, and two student activity directors who organize on-campus events, including dances, open-mic nights, movies, food drives, and retreats. There are also various student-run organizations such as the de Tocqueville Society (politics), the Pre-Medical Society, a pro-life group, and the Legion of Mary.

The life of the College, however, extends not only beyond the classroom, but beyond the campus. California students have the blessing of the region’s beaches and mountains, hiking in the Los Padres National Forest, and taking outings to the finer cultural offerings in nearby Santa Barbara and Los Angeles. In New England, students delight in kayaking and canoeing along the Connecticut River, hiking in the Northfield woods or on Mt. Monadnock, and making excursions to the rich cultural and historical attractions in Boston and beyond.

In addition to studying and prayer, there is always something to do at Thomas Aquinas College — something worthwhile, something fulfilling, and something geared toward ever-greater spiritual and intellectual growth. Here beauty, goodness, and truth are truly one. 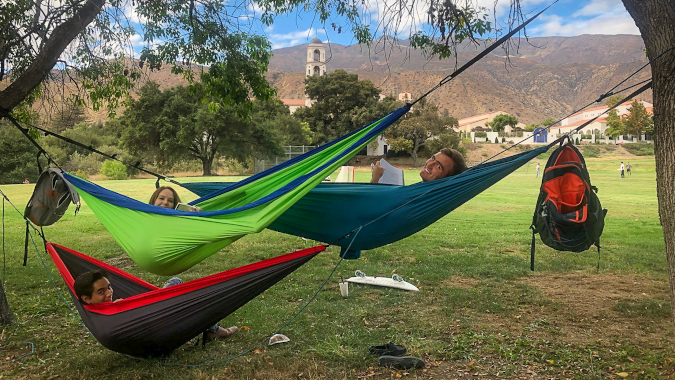 “The student activities program complements the academic program of Thomas Aquinas College by providing the recreation so conducive to the successful pursuit of a serious and demanding intellectual life.”

— From “A Reflection in Campus Life”