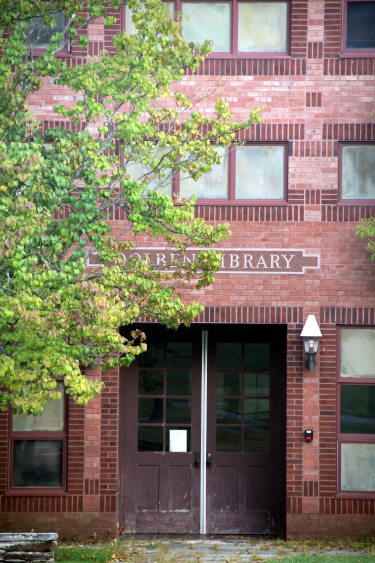 On the southern end of Thomas Aquinas College, New England, overlooking one of the campus ponds, stands Dolben Library. Originally built for the campus’ previous occupant, the Northfield Mount Hermon School, the library was a gift of trustee Don Dolben in honor of his late wife, Catherine Kirmayer Dolben, who graduated from the school in 1954. A real-estate developer who joined the NMH board in 1986, Mr. Dolben is not himself an NMH alumnus; he did, however, see three of his children, one stepson, and three grandchildren attend the school.

In the late 1980s, among the school’s faculty and board, there was a renewed appreciation for the historic aesthetic of the Northfield campus. This appreciation found expression in the restoration of the rich palette of Victorian colors that originally adorned many of the campus buildings. It was also reflected in the “new Victorian” style adopted for Dolben Library, which was completed in 1987.

The library’s decorative brick panels and polychromatic slate hipped roof, designed by Architectural Resources Cambridge, resonate well with the Queen Anne–style elements of the former Skinner Gymnasium, to which the library was later attached. In 1988, Dolben Library received the Award for Excellence in Architecture from the American Institute of Architects, New England.

Approximately 30,000 square feet in size, Dolben Library plays an important role for Thomas Aquinas College’s students in their academic pursuits and in their enrichment outside the classroom. Its collections of books and articles additionally provide necessary research tools when students set out to write their senior theses, the crowning achievement of the College’s academic program.

In addition to offering space for quiet study as well as student interaction and conversation, Dolben has well-appointed meeting rooms in its two towers, suitable for both formal and informal gatherings. It also houses on its lower floor a theater, which hosts campus lectures, movies, and dramatic productions.