Judy and James Barrett are owners of Chateau Montelena in Calistoga, Calif. Mr. Barrett opened the winery in 1972, after having founded a successful law firm in Los Angeles. Although the winery had been established in 1882, it had long since abandoned commercial wine production when Mr. Barrett took it over.

But Mr. Barrett shortly brought the winery to international prominence. In 1976, nine of the most respected wine judges in Paris, France, tasted 20 wines from unmarked glasses. They picked Barrett’s 1973 chardonnay as “best” over the white Burgandies (along with a fellow Napa Valley winemaker whose Cabernet Sauvignon bested the Bordeauxs). This marked the first time in history that California wines had bested acknowledged world-class wines. As a Time magazine feature declared: “the unthinkable happened: California beat all Gaul.” Mr. Barrett was quoted world-wide as saying: “Not bad for kids from the sticks.”

The Barretts’ wines have gone on to receive high international praise since then, and their winery is consistently rated among California’s best wineries for overall quality. Robert Parker of The Wine Advocate says, “What one gets from Chateau Montelena is textbook, quintessential Napa Chardonnay and Cabernet Sauvignon. This is a splendid winery at the top of its game.” The Barretts’ vineyards also produce a top-rated Zinfandel. Tours and tasting are available year-round.

Mrs. and Mrs. Barrett were inducted into the Order of St. Albert the Great in 1998, and Mr. Barrett served on the College’s Board of Governors from 1992 until his retirement in 2010, at which point he was named an emeritus governor. He died three years later, on March 14, 2013. “It is not an exaggeration to say that Thomas Aquinas College might not be here today, were it not for Jim Barrett,” said President Michael F. McLean. “He and Judy have been extraordinarily generous to the College with their time, their counsel, and their financial support. We already miss him greatly, and we pray for his eternal rest and the consolation of Judy and the family.”

Q. Mr. Barrett, you practiced law for a few years, can you tell us a bit about what your practice was like?

Mr. Barrett: I graduated from the University of California, Los Angeles, in 1946, and subsequently from Loyola University Law School in 1949. This was right at the beginning of the Korean War, and so I was recalled into active duty with the Navy for two years where I served on a submarine [the USS Sea Devil] in the Pacific Theatre. When I left the Navy in 1951, I started practicing law in Los Angeles. It was a modest general practice which developed into the specialized practice of shopping center development. In 1959, we formed a law firm known as Barrett, Stearns, Collins, Gleason & Kinney, which at its peak had 26 lawyers plus support staff. It was a dynamic time and a great time to be a lawyer.

Mr. Barrett: I decided I wanted to do something different. I think it was my guardian angel that pointed me in the right direction (laughing). I started thinking about possibly getting into the wine business. So in about 1969, I started looking around the Wine Country in Northern California, checking out old wineries and plots of land. In 1972, I bought Chateau Montelena and decided to give it a go.

I stayed with the law firm for about eight years and commuted back and forth between Southern and Northern California because I wanted a place to punch a notary seal if the winery went flop. By 1980, I was satisfied I was going to make it, so I said adios to the law firm. I then went into the wine business fulltime and never looked back. We’ve been blessed with tremendous success.

Q. The two of you there work as a team, don’t you?

Mr. Barrett: Yes, absolutely. She makes all the decisions and I do the grunt work. It’s worked out very well.

Mrs. Barrett: I’m glad he likes to see it that way!

Q. Mrs. Barrett, you are a lawyer, too. Have you been using those skills in the wine business?

Mrs. Barrett: Not really. I graduated form Loyola Law School much later than Jim, and passed the bar in 1979, but never practiced. But I did get to use that education serving as the Respect Life Coordinator for the Santa Rosa Diocese for about six years. I found my background in constitutional law tremendously helpful.

Q. What sort of activities were you involved in?

Mrs. Barrett: Generally running the diocese-wide program, working with parishes to help promote Respect for Life and covering all of the life issues, from abortion to euthanasia. I also set up various educational programs, as well as the Project Rachel post-abortion and reconciliation programs, and did presentations, talks, and legislative alerts.

Q. Owning a winery seems like everyone’s dream. Has the wine business been a dream for you?

Mr. Barrett: Well, anyone who goes into the wine business with their heart and not their head gets in big trouble real quick. It’s an extremely complicated activity — the most highly regulated business in the country. Most people don’t realize that wine has been part of our civilization for at least 8,000 years, but that doesn’t stop bureaucrats from trying to regulate it and tax it to death.

Moreover, wineries have all of the normal problems associated with any business — and then some after all. Wine-making is an agricultural enterprise, which means that things are always interesting. Disaster lurks a-waiting any year. Also, the competition is incredible. Wine is produced worldwide — in France, Italy, Germany, you name it — and they all consider the United States as their major market. However, our winery has a very narrow high-end market niche, so if we don’t make too many mistakes, we should be OK. It’s such a highly complicated business, I wouldn’t advise anybody to get into it — unless they have very deep pockets.

Mrs. Barrett: God has been very good to us.

Mr. Barrett: Well, to give you an example, when I first saw Chateau Montelena, the only thing here was a beautiful old winery building, mostly occupied by ghosts and spiders. The vineyards were run down with about 14 different varieties of pedestrian grapes, none of which would make very good wine. So we started over, growing grapes from scratch. It turns out that the piece of ground we have here is a special, rare, and unique piece of land for growing Cabernet grapes — rare even for the Napa Valley, which itself is recognized as a special place to grow exceptional grapes.

I didn’t plan that. I had no idea that our vineyard would be as extraordinary as it is. I’d love to say that I had figured it out from the start, but I didn’t. Others might call it fortuity or serendipity, but I know it was God who was good to us. Like I said, my guardian angels took care of us. Everything has gone wonderfully here. The explosion of fine wines occurred and we just happened to be at the right place at the right time.

Q. Tell how you got involved with Thomas Aquinas College.

Mr. Barrett: I had been on the Board of Regents at Loyola Law School and on the Alumni Board at UCLA, where I was its general counsel for a couple of years. This gave me a lot of exposure to what Loyola and UCLA were doing after I’d been in school there. I saw some very bright technocrats being produced, but not much else. And UCLA, of course, was turning out wonderfully educated people as specialists, but for philosophy and theology — forget it. So Judy and I were looking around for some way we could become active and helpful because we had come to realize that our church and society are in deep trouble, and we didn’t want to roll over and play dead in our own little comfortable shell. We could either carpe diem or give it up.

Mrs. Barrett: One of the things that was really a turning point was when we started evaluating Catholic schools and seeing the sort of things they were promoting. We would be astounded to see some Catholic colleges giving awards to people who were notoriously pro-abortion, just because they had excelled for some other reason. And we would see them establishing chairs for something like “Feminist Hebrew Studies,” while at the same time actively turning away chairs for Catholic subject-themes, such as on Natural Law.

Mr. Barrett: About that time, we saw a little ad in National Review about the College. Judy said, “Let’s call them and get some information.” We did just that.

Judy: I called and talked to [then-Admissions Director] Tom Susanka on the phone, and said, “Gee, we’re kind of interested in knowing about your school.” I had a nice chat with him and he sent us information about the College. The rest is history.

Q: Tell us a bit more of that history.

Mr. Barrett: The College offered its first Summer Weekend Great Books Program, and we decided to attend. We were hooked. We thought, “This is exactly what we’ve been looking for!” We came to see that this college could be a “lever to move the world.”

For us, Thomas Aquinas College is a spiritual, cultural, and intellectual oasis in a cultural wilderness. I believe we are living in what I call the American “Dark Ages.” For Judy and me, this college is a small bright beacon in a sea of ignorance and neo-barbarism. Judy and I could go on and on about this, because we have tremendous confidence in the bright, articulate young men and women that are, and will be, graduating from here. These are young men and women committed, morally and spiritually, to fighting for the good of our society and a sound Catholic Church in America. We believe Thomas Aquinas College is vitally important to the future of our society and the Church.

Q. What do you think are some of the greatest challenges the College is going to face over the years?

Mr. Barrett: The battle is an ongoing one. I think these are perilous times we live in — dangerous to the extreme. But stop and think about it — what’s new? The battle for the minds and souls of men has been going on ever since Adam and Eve — and will go on to the end of time. So through the ages the good guys in this ongoing warfare have needed leaders, defenders. Champions. And God provides. In the darkest times throughout history, these champions have appeared. The College simply has to stay true to its founding, and champions will appear — indeed, they are appearing already. I truly believe that the College affects profoundly all those who come in contact with it and its alumni, and that its graduates will be a powerful force to change people’s minds, attitudes and lives for the better in our society.

Q. What books have you read lately that you’d recommend?

Mrs. Barrett: Jim and I are avid readers and big fans of Ignatius Press. I think we probably buy enough books to help pay one-quarter of his [Fr. Joseph Fessio’s] rent there! Lately, I’ve really enjoyed two of Louis DeWohl’s books, his historical novels on St. Catherine of Sienna [Lay Siege to Heaven] and on St. Augustine. 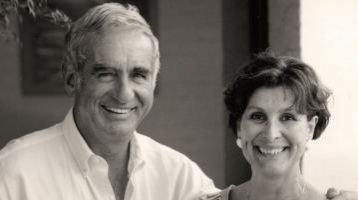