Rosemary E. Donohue was born the oldest of three children to her father, a prominent New York/New Jersey physician, and her mother, the daughter of the famed jeweler, Adolph Walter. Miss Donohue thus came from third generation Irish Catholics on her father’s side and fourth generation German Catholics on her mother’s side. But her mother died when she was four years old, leaving her father to raise the three young children alone. He saw to it that his children (Rosemary, Eugene, and Daniel) received the best Catholic education available in New York and New Jersey.

On graduating from high school, Miss Donohue entered the world of fashion, attending the famed Parson’s Fashion School of Design in New York City. She thereafter worked at Hahne & Co. in New Jersey, where she advanced in merchandizing and ascended to the position of Buyer in various departments of high-end fashion clothing.

In 1954, she traveled to California to attend the wedding of her younger brother, Daniel, to Miss Bernardine Murphy, the daughter of Antoinette and Dan Murphy, a prominent California philanthropist and industrialist. Rosemary, Daniel, and Bernardine formed a deep bond. At Bernardine’s suggestion, Rosemary decided to leave her fast-paced New York life behind her and move west to be near them. Her other brother, Eugene, had since relocated to Illinois, where he followed in his father’s footsteps in the practice of medicine.

But she didn’t quite slow down. Instead, she befriended Sister Fidelis, the administrator of St. Vincent’s Hospital in Los Angeles, who asked her to head up the hospital’s Personnel Department during a critical period of reorganization. Thus began Miss Donohue’s involvement with the Daughters of Charity (who ran St. Vincent’s), and which would continue throughout her life. Miss Donohue thereafter moved to San Francisco to work with the Daughters’ outreach program for unwed mothers in the early 1960s. She got involved in Republican politics and took over as head of the San Francisco headquarters for the Goldwater presidential campaign in 1964. But she missed Daniel and Bernardine and decided to return to Los Angeles after the campaign and devote her life to philanthropic activity.

By then, Daniel and Bernardine were busy managing The Dan Murphy Foundation, which they had established in 1957 in memory of Bernardine’s father to promote important Roman Catholic and other philanthropic causes. So helpful to the Church was The Dan Murphy Foundation that His Holiness Pope John XXIII conferred on Bernardine the title of “Papal Countess,” the only title given to an American during his pontificate. Several years later, His Holiness Pope Paul VI conferred on Daniel the title, “Gentleman of His Holiness,” the highest award bestowed on a layman in the Church, and the first such Award ever given to an American.

But in 1968, Countess Bernardine died unexpectedly and left Sir Daniel to carry on the work of their Foundation. Sir Daniel thus invited his sister, Rosemary, to serve on the Foundation’s Board with him.

In 1984, Miss Donohue was honored as a Lady of the Equestrian Order of the Holy Sepulchre of Jerusalem and was promoted to Lady Commander in 1997. His Holiness Pope John Paul II also conferred on her the honorary Cross Pro-Ecclesia et Pontifice medal. In 1993, at the request of His Eminence Roger Cardinal Mahoney, then Cardinal Archbishop of Los Angeles, Miss Donohue became one of 13 women in the world, and one of the first Americans, to be honored as a Dame of the Pontifical Order of St. Gregory the Great.

Among its philanthropic activities over the years, The Daniel Murphy Foundation has been particularly generous to Thomas Aquinas College, having helped build Our Lady of the Most Holy Trinity Chapel and St. Bernardine Library, and having launched the Endowed Scholarship Fund. Active with the College since the 1970s, Miss Donohue was appointed to the College’s Board of Governors in 1986, and in 1997, became Chairman of the Board’s Trusteeship Committee. She retired from the Board in 2010, and by resolution of her erstwhile colleagues was granted emeritus status in honor of her many years of exemplary work on behalf of the College.

An Interview with Rosemary Donohue (1998)

Q. You have been blessed with the opportunity to meet many cardinals and bishops in the Catholic hierarchy over the years, including three popes (Their Holinesses Pope Pius XII, Pope Paul VI, and Pope John Paul II). How have those experiences influenced your own faith?

I don’t know how I can begin to describe that. We always try to act as our faith leads us, but there is something very powerful about being in the company of the representatives of Christ. You see that our Church is a Church of people, and it makes you think of how Our Lord has used people throughout time to spread the Gospel to all nations. It is wonderfully inspiring to see so many great spiritual men trying their best to lead people to God and carrying out the mission of Christ on earth. I’ve been honored beyond words to meet so many of them.

Q. What do you see happening in the Church in the next few years?

This is still God’s world, and He will be with us until the end of time. The Church has lived through many forms of persecution, but we have to remind ourselves of what our Holy Father keeps saying: “The Church is guided by the Holy Spirit, and Christ the Lord will not fail us.” His Holiness Pope John Paul II, throughout his pontificate, has constantly exhorted bishops, priests, and the laity to evangelize. It’s up to us then to so evangelize.

We have many trials left to endure, and I just don’t know what’s going to happen to our own country. We may not even have a country in 50 years. We’ve become like ancient Rome when it fell. You can’t build a country with families that are being so divided, or when the Ten Commandments are so seriously neglected. Where are the teachers — where are the parents — who will teach our children right from wrong? If they come from anywhere, they will come from the Church. And if the Church can’t produce them, then God help us.

Q. You do see bright spots in the Church today, though, don’t you?

Most certainly. There are many great religious orders and seminaries, both here and around the world, starting to produce good holy men and women who are seeking to establish Christ’s will on earth. We’re also seeing a great number of conversions occurring in Africa and in parts of Asia due to the inspiring work of our missionaries there. Time will tell how all of this turns out.

Yes. Education — which includes moral training and discipline — is so critically important, but it has to start in the home. You have to have it if society is to survive. If you don’t have it, then you get the frightening situation we have today. This is why our Holy Father speaks so powerfully on the institution of marriage and the sacredness of the family.

Q. You’ve been involved in the life of the College for 22 years now. How did you become involved?

Back in 1978, I went to a talk at the Jonathan Club in Los Angeles given by [founding president] Ron McArthur. I could see that he had a great idea and that he really was promoting an authentically Roman Catholic college. I heard what he had to say, I met with [then Director of Development] Dennis Koller and talked some more, and I could see that what they were offering was so desperately needed for our times. And they were so enthusiastic. Later, as I became more involved, I could see they were doing a great job with the students. You could actually see that a genuinely Catholic education was giving young people a foundation on which to rebuild society. I have been strongly committed ever since then.

Q. You are Chairman of the Board of Governor’s Trusteeship Committee. How do you see the work of that committee?

Our Board has been blessed with a number of talented members over the years who have a great deal of business experience and the means of seeing that the College becomes fully developed. More recently, in fact, we’ve been able to attract still more accomplished people from the outside world who are bringing their great business acumen to bear on important business decisions that the College faces. My goal is to see that we continue to attract such people. I’m not going to be around forever, and I am greatly relieved to see these younger members come on the Board and continue this great work.

Q. What do you see in the future of the College?

The College has a great future. It’s graduating well-educated young men and women and has made great progress in the few years since it was founded. The students are disciplined and have been trained to think and reason so well that it’s no surprise they are wanted by the best universities throughout the world. I certainly hope there will be more Thomas Aquinas Colleges in the future. As soon as the College reaches capacity, I think it will be time to start anew someplace else. I wish to see that happen soon. I feel like all of these students are my children — my special brood.

Q. Do you have any present projects you are working on for the College?

I continue to work closely with President Dillon on personnel matters and in promoting the College in many different areas. Also, I hope to be able to put my fashion design skills back to work by designing concert robes for the choir. But we’ll see how that goes (laughing). 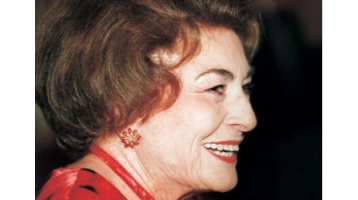