“I was in a foxhole, the shells were exploding all around, and all of a sudden I was seized with fear for my immortal soul. I remembered then my Catholic faith, which returned in an instant, and I promised God that I would amend my life and serve Him faithfully if He got me out of there alive.” Captain Bill Lawton, recently returned from Korea, told me this in one of the many conversations we were to have after evening classes at the University of San Francisco in the fall of 1956, where the Army had just assigned him as a teacher in the ROTC program.

We met because he had been bounced years before from West Point for violating discipline (the last straw, he told me, was walking in a tunnel which was off-limits), and was therefore taking courses to get his degree. As I was then an instructor of philosophy, he ended up two nights a week in my course. At the end of our first class together I was putting my books in my briefcase as he approached me and said, with mock consternation, that he didn’t know about the other students, but that “I won’t just listen to professors. When I don’t understand something I’ll hound you until you explain it to me; be prepared for that.”

He was prophetic, but it became clear that his warning had been what it seemed — a friendly challenge to help him learn. He wanted somehow desperately to succeed, as if, I began to think, he were making up for opportunities neglected. When, then, he told me about the incident in the foxhole, it anchored my experience of him, and our growing friendship led on my part to an admiration, and then to a love which one can have for only a few in this fallen world.

No one could have had the slightest understanding of Bill Lawton, at least by the time I had met him, without knowing that his primary aim, of which he was constantly aware, was to obey God, and in so doing to please Him. His duty, which he saw with a clarity not given to all, was exacting; it was forthright in its demands and invulnerable to the lure of an ever-expanding catalogue of exceptions.

Our greatest spiritual writers teach us that while we must serve God in the same way, essentially by obeying His commandments, frequenting the sacraments, praying, fasting, and almsgiving, there are at the same time as many ways to tailor the essentials as there are those who enter His service. Bill Lawton was, by temperament and background, a warrior, and warrior he remained.

Born into an Army family, his father a Lieutenant General, his ambition was to serve his country with honor as an officer in the infantry, “the only real branch of the service,” to hear him spit it out. By the time we had met he had fought in Korea, and then, years later, he was to fight again in Vietnam. During the years before and after his time in Vietnam my wife and I became fast friends with Bill and his Peggy, who, if the truth is to be told, was the “sheet anchor” of his life. Many of our conversations touched upon the alarming decline of the moral tone of the country, and of its effect on the Catholic body. When, then, we were trying to found the College, which was a battle by other means against American education and the Catholic imitation of it, one thought instinctively of by-then Lt. Col. Lawton, for whom our activities were a small part of the larger struggle against the forces arrayed to destroy what remained of our once-Catholic civilization.

Bill’s willingness to stand with us as a possible founder of a non-existent college with uncertain prospects was in character with his many other acts of friendship over the years — spontaneous, trusting, and animated by the warmth of his affection. His love of all things Catholic prompted him not only to join with us, but also later to help so many of our students and graduates he came to know — arranging an interview, acquiring a green card, extending a visa, finding a scholarship, gaining financial help — with a persistence and determination with which, I thought with approbation, he probably led his men into battle. How many there are of us whose lives are the better for his exertions in our regard!

So then the record, all in warfare against the Prince of Darkness and his minions: Korea, Vietnam, founder and a Vice President of Thomas Aquinas College, Vice President of Catholics United for the Faith, and willing prisoner in the jails of Southern California for standing against abortion — all accomplished by the devoted husband of a most charming and loving wife and the concerned father to their six children, whom he loved above all and for whom he prayed as if nothing else mattered than that they would save their souls.

Belloc, speaking of the old age of William the Conqueror, observes that “in the phase of human life there is, for most men, and for nearly all mature men, a period of some years introductory to death: which years are years of disappointment at the least, and at the most of tragedy.” He goes on to say that “with those who have done much there is an added burden, which is that they must cease from battle; for the body is no longer supporting the immortal mind.”

Bill Lawton was a luminous exception. His body did indeed decay, but with his “immortal mind” he battled on, impervious to the passage of time. His unquenchable relish for the things of heaven gave testimony to the joy of the spiritual childhood which awaits those who enter the lists in the service of that Commander and Chief Who has, in His own words, “overcome the world.”

I for one will miss him as I will miss few others. He was my good and steadfast friend, a wonderful companion, and lavish in arousing the pleasure which seemed to permeate our activities together. I have no idea whether in sum I ever taught him much of anything, but he, by word and deed, taught me the deepest meaning of “duty, honor, country,” the motto which signifies the commitment which had prompted his career.

He told me three days before his death, in a voice barely audible, that he was offering his sufferings for the College, and that he had been trying to make connections for it in Rome when he became too weak to go on. May we then, his friends and associates, pray for his children, and for Peggy, the constant companion in body and spirit without whom he might well have faltered in fulfilling the promise he had made in the foxhole; and accept as our duty to pray for the soul of our faithfully departed friend. May his soul rest in the peace he so ardently desired as the goal of his many labors. 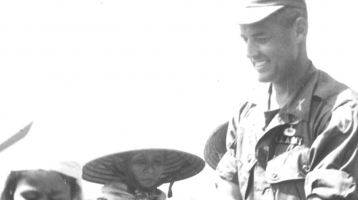