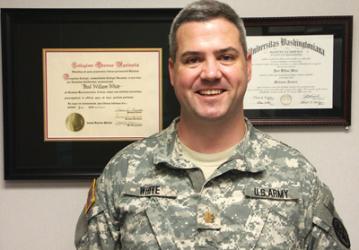 Col. Paul W. White, M.D. (’95) grew up in Illinois in a family of physicians. Both of his grandfathers, his father, and all of his father’s brothers are doctors. Yet medicine, let alone military service, was not immediately on Dr. White’s mind when he was choosing a college in the early 1990s.

Although Paul had been offered academic scholarships at several other schools, he opted for Thomas Aquinas College on the advice of his father, who had treasured the Jesuit education he had received at Massachusetts’ College of the Holy Cross in the 1960s. “My dad said, ‘There’s no school in the country that can give you an education that would match the education I received at Holy Cross, except for one, and that’s Thomas Aquinas College. And there you’ll get an even better education than I got at Holy Cross.”

During his time at the College, Dr. White decided that he, too, wanted to pursue a career in medicine, so he took pre-med classes at the University of Illinois at Chicago (UIC) during the summers. The contrast between the integrated course of study at the College and the specialized training at a more conventional campus was striking. “While the University of Illinois, especially in the summer-school program, offered very fine vocational training, it had nothing to do with seeking the truth and acquiring those virtues and knowledge required to live as a free man, which is the end at Thomas Aquinas,” he says.

Both experiences, though, have been vital to his practice of medicine. The foundation in modern science that Dr. White received at UIC is, of course, fundamental to a doctor’s understanding of the human body. But perhaps less obvious, yet no less important, Dr. White argues, is how the intellectual formation he received at the College has helped him to comprehend the natural order. “The Thomas Aquinas education,” Dr. White says, “teaches you how to think in a structured, ordered fashion. In modern medicine, when you’re dealing with a tremendous amount of information, it is very helpful to be able to apply an order and a structure to very diverse, confusing clinical situations.”

Yet “the most important benefit” of his Thomas Aquinas College education, Dr. White says, was not professional, but spiritual. “At the College,” he notes, “I received a deeper understanding of the Faith and a deeper relationship with Christ, especially through daily Mass.”

Medicine and the Military
After graduating from the College in 1995, Dr. White worked as an editor at a small publishing firm in Chicago while waiting out the medical-school admissions process. A year later, he enrolled at Washington University School of Medicine in St. Louis, widely acknowledged as one of the top medical schools in the country. He presumed that, upon earning his M.D., he would pursue private practice — until one day U.S. Army recruiters arrived on campus.

“In medical school, you’re sitting there signing loans for $30,000 a year, wondering if you’ll ever be good for it,” Dr. White jokes. “And along comes an Army recruiter who says, ‘We’ll pay for medical school, and we’ll pay you $1,000 a month.’” The opportunity to relieve his debt and serve his country at the same time was too good to pass up, and thus began a distinguished career in the Armed Forces.

After two more years of medical school, Dr. White graduated in 2000. Shortly thereafter, he went to Walter Reed Army Medical Center, the most prestigious military hospital in the country, to begin a six-year surgical residency followed by a two-year fellowship in vascular surgery, which he completed in 2008. He then spent four years at Eisenhower Army Medical Center in Fort Gordon, Georgia, and he served a one-year tour of duty in Iraq.

While at Walter Reed, Paul met Margaret, a University of Dallas graduate then working at the Heritage Foundation, a Washington-based think tank. The couple married on August 11, 2001, exactly one month before the terrorist attacks of September 11. The timing would prove telling. As 9/11 gave way to wars in Afghanistan and Iraq, it largely dictated the nature of the medicine Dr. White would practice over the next several years and would ultimately lead to his own deployment.

In 2012 Dr. White returned to Walter Reed to become the director of the vascular-surgery fellowship, training the Army’s general surgeons to become vascular surgeons by teaching the latest methods in research, testing, imaging, and surgery, both endovascular and conventional. In this capacity he became, in 2016, the consultant to the Surgeon General for vascular surgery. In June 2018 he was promoted to the rank of colonel.

“I still work directly with patients because a lot of surgical training is apprenticeship-based, where we’re training the fellows in the operating room,” he explains. “But as an active duty Army officer, I have deployed several times, and I have other duties as far as field exercises, teaching courses, research, and academic work.”

The Ravages of War
At Walter Reed, roughly one-third to one-half of Dr. White’s patients have been soldiers from Afghanistan or Iraq who were injured in battle, received life-saving care in the region, and were then evacuated to the United States by way of Germany. Upon arrival in Washington, they would require follow-up treatment, including reparative and reconstructive surgeries. In Iraq, treated the freshly wounded as they came directly from the battlefield.

Yet despite the severity of the cases he treats, Dr. White is sustained by a philosophical approach to medicine that he first learned at Thomas Aquinas College. “The physician is a student of nature,” Dr. White explains. “My job is to watch pathology and disease processes; to watch the biology of the human organism, and observe that carefully; to learn what I can from it, and then arrange the circumstances so that nature can work to bring about healing.”

Arranging those circumstances, he adds, requires a patience and humility that he learned through the College’s curriculum. “The Thomas Aquinas College education teaches you that one has to be a servant of truth, whatever that truth is, whether that’s truth about human biology or human psychology or truths that are above that level completely,” he says. “One has to recognize that one can’t impose one’s own desires, will, and order on that truth.” This recognition, he finds, has direct applications to the responsibilities of a surgeon: “I think that you tend to have a greater respect for nature, to be less eager to intervene, more willing to acknowledge your own limitations as a physician.”