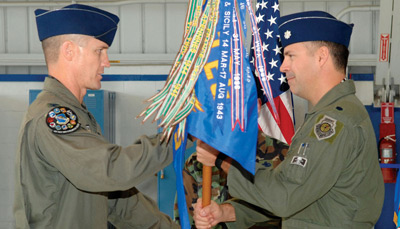 Col. Sam Shaneyfelt, USAF (’86), works at Langley Air Force Base in Virginia at Headquarters, Air Combat Command, where he helps to manage the production of the Department of Defense's newest fighter aircraft, the Joint Strike Fighter (F-35). A former pilot, Col. Shaneyfelt jokes that he has “traded in my lovely F-16 Fighter for a desk that doesn't move nearly as fast.” Nonetheless, “the job's important, and I'm happy to get to work getting this fighter into the hands of capable pilots,” he says.

Previously Col. Shaneyfelt spent two years commanding the 35th Fighter Group at Misawa Air Base In Japan, where he was responsible for flight operations, airfield management, intelligence, tactical air control, combat plans, weapons and tactics, and weather support for the Air Force's 35th Fighter Wing. Before that he served as the Operations Director for the Combined Forces Air Component Commander at Al Udeid Air Base in Qatar.

In 2008, Col. Shaneyfelt was one of four Air Force officers service-wide selected for his “demonstrated outstanding leadership potential” to participate in the Executive Leadership Development Program of the Department of Defense. Formerly, he was honored with an appointment to the Naval War College and served as Weapons Chief at Hill Air Force Base in Ogden, Utah

In 1998, he graduated from the U.S. Air Force’s prestigious Weapons School near Las Vegas, Nevada, which is limited to professional officers who demonstrate the highest standards of officership and airmanship — the “Top Guns” as they are frequently called. Only about 5 percent of the Air Force’s fighter pilots are good enough to be admitted to, and graduate from, Weapons School.

And for Col. Shaneyfelt, the figures are even more impressive. He flies the fighter that is perhaps most coveted of all fighter pilots, the F-16 “Viper,” (often seen in airshows as the “Thunderbirds”). Only one in 100 applicants is selected for pilot training, and less than 10 percent of those who complete pilot training are assigned the aircraft they want.

Nevertheless, he saw plenty of post-War action, as he was sent to mop up missions in Northern Iraq helping the Kurds flee from Iraq. From his home base in Spangdahlem, Germany, he also did exercises and airshows all over Europe and Turkey. His flying earned him a 4-ship flight lead and an Instructor position, rare promotions for a pilot in his first operational tour

In 1994, he returned to Luke AFB as Supervisor of Flying and as Chief of Weapons, and with 7 medals, 4 ribbons, and 10 awards to boot, ranging from the Aerial Achievement Medal to the Humanitarian Service Medal, the “Duke of Nuke” and numerous “Top Guns.”

Col. Shaneyfelt will tell you that his liberal education has helped him be where he is today. “Thomas Aquinas College gave me a foundation which allowed me to seek truth in all things and to come by basic concepts of tactical weaponry and fighter employment more easily. I’m also particularly thankful for obtaining a sound understanding of my faith and a closeness to the sacraments.”