Upon launching his dental practice in 2005, Thomas Hart, D.D.S. (’91), was eager to see his business grow and his patient list expand. Yet he never expected that just two years later he would open a satellite office — in a Carmelite convent.

The owner of Wahoo Family Dentistry in Wahoo, Neb., Dr. Hart travels some 45 miles once each month to the Carmel of Jesus, Mary, and Joseph in Valparaiso. In a fully operational, on-site dental office, he provides care to some 28 discalced nuns in the privacy of their cloister.

“It is a blessing,” he says of his pro bono practice, albeit one borne of tragedy. In 2007 Dr. Hart’s friend Dr. Clem McGill was killed in an automobile accident. Dr. McGill had long taken care of the nuns and had furnished most of the convent’s dental facility. Mindful that the sisters would need a new dentist, Dr. Hart volunteered, and Mother Superior gratefully accepted.

His service to the sisters has in many respects been a Thomas Aquinas College alumni affair. To complete the monastery’s dental room, Dr. Hart sought donations from fellow graduates, who “have been very generous,” he reports. And among his new patients are three alumnae of the College — Sr. Paula Grimm (’08), Sr. Pauline of Christ (Bridget Morey ’05), and Sr. Miriam Therese Waldman (’07). “It’s a wonderful opportunity to go into the cloister, to help the sisters out, and to get to know them a bit,” he says

Saintly Inspiration
Dr. Hart’s relationship with the College began when he was a teenager and derives, he says, from a saintly source — Servant of God John Hardon, S.J. As a high school senior in Iowa, Tom accompanied his father on several retreats led by Fr. Hardon, the College’s Commencement Speaker in 1981. “Fr. Hardon really pushed Thomas Aquinas College,” Dr. Hart recalls, and that recommendation inspired his application. “I’m really grateful to the College,” Dr. Hart says. “I received strong spiritual development and a solid education there that have helped me throughout my life.” He credits the classroom Discussion Method for fostering the tools of critical thinking and communication that are vital in medicine. “That sort of step-by-step reasoning gets ingrained in you — you do it day in, day out at the College so that it becomes second nature. It has helped me to make difficult concepts understandable for my patients.”

At the College Tom also met his wife, Anne Marie (Brooks ’93). “We didn’t really go on any dates because I didn’t have a car or any money,” he laughs, but the two did form a fond friendship. They lost touch after graduation, but one day when he was in graduate school at the University of Iowa, Tom “cold-called” Anne Marie, who was still in California, and a long-distance relationship quickly ensued. The couple married in 1997. 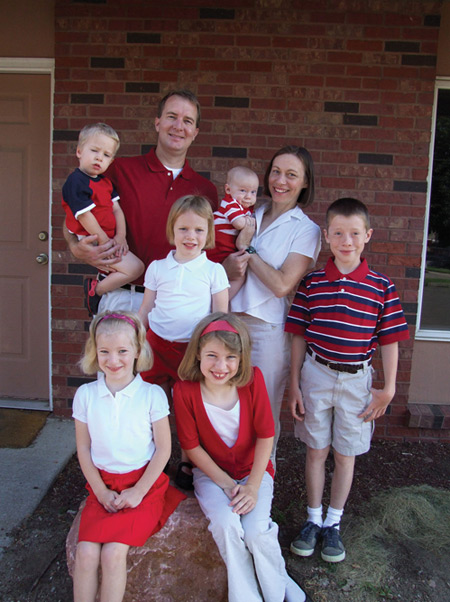 For his first five years after dental school, Dr. Hart practiced at a Des Moines clinic for low-income patients as part of a state program that forgives dentists’ student loans in exchange for their service. “It was great working with the underserved, people who are in dire need of dental work,” he says. “You get a real sense that you are truly helping people.” After that, the Harts relocated to Nebraska, where they launched Wahoo Family Dentistry.

Today Dr. Hart sees some 10-15 patients daily, six days a week, and Wahoo Family Dentistry employs two assistants and a receptionist. Mrs. Hart handles all of the company’s billing, payroll, and accounting responsibilities — in addition to caring for the family’s six children, ages 1 to 12.

Dr. Hart’s services at the Carmel, meanwhile, might not boost the family’s finances, but he is confident that they carry other rewards. Some days he takes his children along with him, and they get the rare privilege of “rubbing elbows,” as he puts it, with cloistered religious. “I can see the way my girls look at the sisters,” he says thoughtfully. “You never know what kind of seeds you’re sowing when you do that kind of work.”