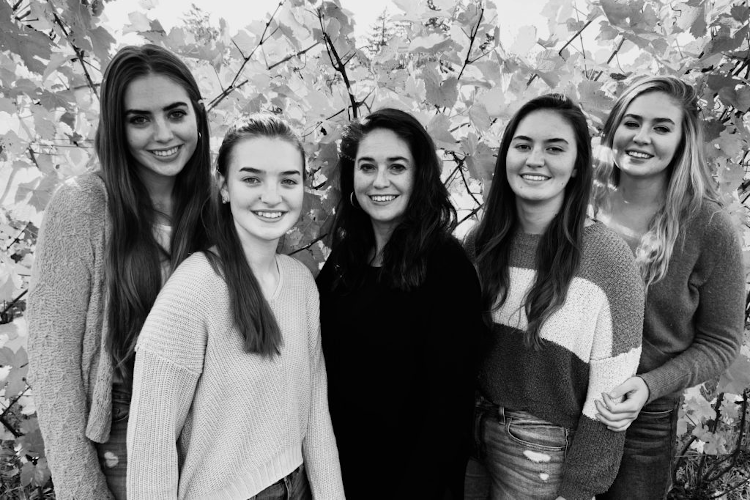 Five women winemakers — three of them Thomas Aquinas College alumnae — have come  up with  a novel way to make the most of these difficult times.

With stores in some regions closed, and with many customers avoiding in-store purchases, the demand for shipped products is greater than ever. Yet wine is a notoriously expensive product to mail, with full glass bottles weighing three to four pounds apiece.

Enter the Distaff Wine Co. in Newberg, Oregon, owned by Angelica (Ellis ’88) O’Reilly and daughters Moira (’19), Roisin, Marie-Therese, and Brigid (’16). The company has launched the Nomen line of wines, which are sold in bottles made from polyethylene terephthalate, or PET, weighing in at just 1.4 pounds. Boxes of these shatterproof bottles — and no other packing materials — weigh less than half of those containing most other wines.

The vintners are the subject of a recent story in the Oregonian, which notes that the minimalist packaging makes the wines popular among those concerned about the environmental impact of shipping heavy glass bottles. “We recognized that 60 percent of the carbon emission in the wine industry is due to the production and transportation of glass bottles,” Brigid O’Reilly tells reporter Michael Albert. “By using PET, we can reduce that number by 77 percent.”

The “Nomen” name is a play on words, honoring Distaff’s all-women ownership and, through its Latin meaning (“family name”), the company’s male accomplice — David (’87), husband of Angelica, father of her co-owners, and the founder of the famed Owen Roe winery. “I’m just an amiable fatherly figure giving guidance when asked and trying to steer clear of the trail they are blazing,” David tells the Oregonian. The women call the shots.