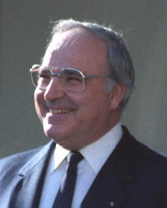 Over at First Things, Pater Edmund Waldstein, O.Cist. (’06), has a thoughtful reflection about former German Chancellor Helmut Kohl, who died last week. “In order to understand Kohl’s characteristic blend of German patriotism and passionate support for European integration, it is important to note which German province he came from,” writes Pater Edmund, a Cistercian monk at Stift Heiligenkreuz in Vienna, Austria. Chancellor Kohl came from the left bank of the Rhine, notes Pater Edmund, which “unlike much of the right bank … remained Catholic after the Reformation.” Indeed, Pater Edmund concludes of Chancellor Kohl, “perhaps he was the last of those Rhenish-Catholic statesmen who still embodied something of the old spirit of Latin Christendom.”

The full story, The Left Bank of the Rhine, is available via First Things.