“In late spring of this year, Fr. Peter Sharpe received a phone call from The Most Reverend John Folda, Bishop of the Fargo Diocese, explaining that Fr. Jerome Hunkler was about to retire and asking if he would be willing to take his place. Leaving a congregation one has come to know and love is never an easy thing, but Fr. Peter answered with a resolute ‘yes.’” 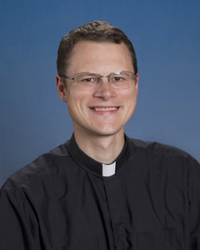 Rev. Peter Sharpe (’04)So writes the South  Steele Ozone and Kidder County Press about a Thomas Aquinas College alumnus, Rev. Peter Sharpe (’04), who now serves as pastor at three parishes in the Diocese of Fargo: St. Mary’s, St. Paul’s, and St. Francis de Sales. “As a priest, I have found I can’t fix people, nor is it my job, but the Lord can and does change lives,” Fr. Sharpe tells reporter Maria Wanchic. “If we’re patient enough, we’ll see what good plans God has in store for us.”

After graduating from the College in 2004, Fr. Sharpe entered Fargo’s Diocesan Seminary Program, spending one year at Cardinal Muench Seminary in Fargo and four years at Mt. St. Mary’s Seminary in Maryland. Before taking on his new, three-parish responsibilities this fall, he served for seven years as a pastor in Velva and Karlsruhe, North Dakota.

In addition to his pastoral duties, Fr. Sharpe wrote an article earlier this year for the diocesan website, Why are non-Catholic but baptized Christians not to receive the Eucharist? — a topic he later took up in diocesan podcast.

The word “amen,” offered before reception of Holy Communion, is too often underappreciated, he adds, especially by Catholics, who say it so frequently that they can easily lose sight of its import. “When you say that ‘amen’ to those words, ‘the Body of Christ,’ that means something,” Fr. Sharpe implores. “Words mean something, and this ‘amen’ means something.”

“I am a sinner, who has already publicly declared that a little earlier in the Mass,” says Fr. Sharpe of the Confiteor. “But I’m also believing that God’s power has changed my life, and I want it to continue to change my life.”