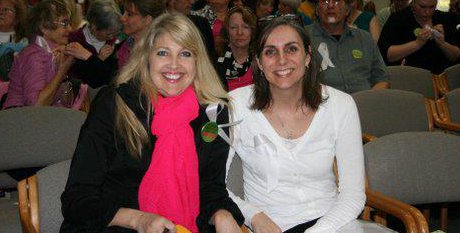 Angela Connelly (’87), left, at a hearing in Olympia


Seattle’s Crosscut.com reports that legislation requiring Washington employers to fund abortion coverage appears destined for failure — thanks, in part, to the work of Angela (Andersen ’87) Connelly, an alumna of the College and a member of its Board of Governors.

Under the provisions of the perversely named Reproductive Parity Act, all insurance plans in the state of Washington that cover maternity care would be compelled to pay for abortion coverage as well. Employers with moral objections would thus be forced either to violate their consciences or to drop maternity coverage altogether.

The Washington Women’s Network, of which Mrs. Connelly is the founding president, has fought the legislation valiantly. The Network sent a delegation to Oympia to testify against the bill before the House Health and Wellness Committee, joined by His Excellency Eusebio Elizondo, Auxiliary Bishop of Seattle. “This bill is not about access to abortion,” said Mrs. Connelly in her testimony. “This is a bullying bill. It’s not about choice. It’s about taking away choice.”

The Network’s efforts seem to have paid off. According to Crosscut.com, the legislation has stalled in a Senate committee, with zero chance of making it to a full vote this session. Deo gratias!