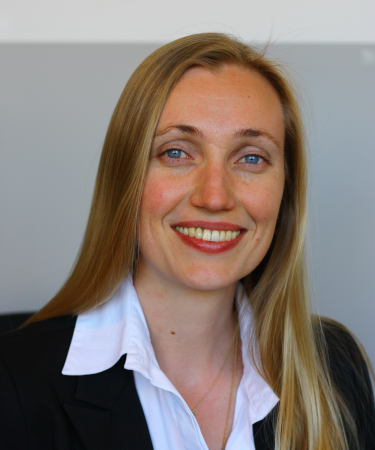 When Daina Andries (’09) graduated from Thomas Aquinas College, she thought she wanted to pursue an academic career, studying and teaching French literature. For a time, she did just that, receiving a scholarship with a stipend at the University of Delaware, where she earned a master’s degree with honors. While a graduate student, however, she discerned that teaching was not for her. So she considered other possibilities, ultimately choosing data science. Today she is the co-founder of her own company, Epidaurus Health.

Named for an ancient Greek city that’s regarded as the birthplace of modern Western medicine — where practitioners first began taking an empirical approach to healing, documenting which practices worked and which ones did not — Epidaurus utilizes information technology to streamline and simplify the reimbursement of prescription-drug purchases.

“When you go to fill a prescription, it might not be covered by your insurance, but you usually don’t know that until you show up to the pharmacy,” Miss Andries explains. “What often happens then is that your claim will get rejected, and that rejection starts a process called ‘prior authorization’ — a mess of hidden, moving parts that can lead to a lot of inflated drug prices that make zero sense to the consumer.”

Enter Epidaurus. “Our solution comes in targeting the prior-authorization process to make it run as smoothly as possible on the backend, so that a physician and patient can have more information,” she says. “My hope is to get our foot in the door and do some good in terms of making the analytics more transparent to the final-end consumer, the patient, while also making the clinical criteria more readily available to be shared between hospital and payer. We want to make that required clinical data securely and efficiently transmissible but also more complete, so the likelihood of coming to a fairer determination for that patient will go up.”

The shift from French scholar to STEM entrepreneur was, she admits, not easy. After earning a master’s degree in information science at the University of Michigan, Miss Andries worked as a metadata technician at the U.S. Library of Congress in Washington, D.C. From there she was hired on a contract basis, cataloguing information for a nonprofit, before landing at Red Oak Strategic, a consulting firm in Alexandria, Virginia.

Her liberal education, she found, served her well in this new line of work. “I was assigned to a client in finance who was building a platform for automating the trading of commodity and weather derivatives — of which I knew nothing to start,” she recalls. “But the first time I met him, he did a Finance 101 intro to derivatives for me on a whiteboard — and my mind instantly flew back to TAC calculus and shrinking little rectangles (Newton’s infinitesimals). Of course, I had to brush up on the theory behind the application, but I knew what it was, which made that introduction to finance a lot less intimidating for a French literature major.”

When the project came to an end two years ago, Miss Andries launched Epidaurus, a spin-off of Red Oak, whose CEO is her co-founder. “I think the TAC education has helped me in ways beyond words,” she remarks. “Instead of mastering a single subject, you take on a variety of subjects in a program that actively encourages you to ponder how these subjects play together — what about math helps you appreciate music; or what about philosophy helps you to get ahead in science or to do math. All serious education is worth it, but TAC students, in particular, have a serious, rigorous education, and there’s something more to it — something more special.”

Thomas Aquinas College students, she contends, are a natural fit for the multidisciplinary field of data science. “I think in our society right now, and in particular in my industry, which plays at the intersection of tech, business, and science, we need more people like the ones that come out of TAC,” Miss Andries observes. “I think the world would be a much better place if there was more of a presence of TAC in it.”