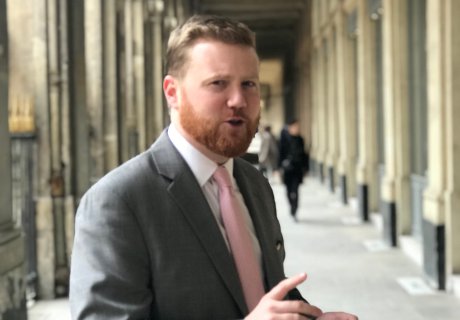 “I am blessed to be working for Senator Cruz, who routinely stands in the Senate for the sanctity of human life, the nuclear family, and religious liberty at a time when such things are almost universally scorned by our national media and corporate boardrooms,” says Mr. Gribbin. “It is a wonderful opportunity to take part, in some small way, in fighting for these timeless truths, and to defend our rights under the Constitution, which protect our ability to live by them in our work, our homes, and the public square.”

A native of the nation’s capital, Mr. Gribbin has worked in politics since his graduation from the College in 2010. Previously he served as director of speechwriting for Secretary Ben Carson at the Department of Housing and Urban Development, and before that as a writer and special projects coordinator for Heritage Foundation President Jim DeMint.

“The more time that passes since my education at TAC, the more humbled I am to have received it,” says Mr. Gribbin. “Apart from the gems of philosophy and theology (and many other disciplines) we explore as students, the most valuable thing we walk away with after graduation is the discipline of approaching new ideas critically and patiently, focused on objective truth. There are few arenas where this focus — or the lack thereof — is more consequential than the political realm.”

As a speechwriter, he prays for the discipline to keep this focus at the heart of his work. “At its best, rhetoric can serve as handmaiden to truth, and help our society arrive at the common good through the dialectic,” Mr. Gribbin explains. “At its worst, it can only be what Plato calls ‘the sophist’s art.’ God willing, I hope to deal exclusively in the former.”