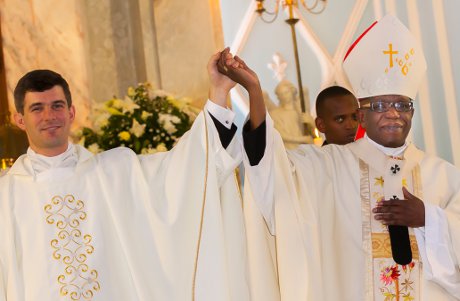 Rev. Deneys Williamson (’10) at his ordination with his bishop, the Most Rev. Buti Joseph Tlhagale, Archbishop of Johannesburg

When Rev. Deneys Williamson (’10) left his home in Johannesburg, South Africa, to become a freshman at Thomas Aquinas College in 2006, he scarcely thought of becoming a priest. “I came as a young, arrogant, 19-year-old, thinking I was probably called to marriage, and hoping to meet a nice, beautiful American girl,” he says. “I had a few inklings of a priestly vocation, but I put those on the back burner.”

Still, he was open to God’s will. “I realized that I was at a stage in life where I had to make a choice and either start practicing my faith seriously or reject it and start acting like a pagan,” he remarks — and by God’s grace, he made the right decision. On October 8, 2016, the Most Rev. Buti Joseph Tlhagale, Archbishop of Johannesburg, ordained Fr. Deneys to the priesthood of Jesus Christ in the city’s Immaculate Conception Church.

Ten years prior to his ordination, when he was still in high school, Fr. Deneys learned about Thomas Aquinas College from an ad in a magazine. “When I saw what the College offered in terms of a program, I realized that it was exactly what I was looking for — a classically liberal education. Nothing like that exists in South Africa,” he says. “So I shipped off to Southern California, the other side of the world, to take a chance.”

Over the course of what he describes as “four wonderful and happy years on a bucolic campus,” he gradually discerned his calling. “When I was at the College the seed of my vocation was slowly nurtured and watered by the friendships, by the sacraments, by being introduced to a life of prayer, thanks to the work of the chaplains, and the intellectual life,” he says. Particularly helpful was time spent before the Blessed Sacrament and his Junior Theology class. “Reading the first 12 questions of St. Thomas’ Summa Theologiae, about the qualities of God, was a seminal moment in my intellectual life and journey,” he observes. “Seeing the primacy of God, both in the universe and in our own lives, really lit the desire within me.”

By late junior year he began to think more seriously about the priesthood, particularly the religious life, but he was still uncertain. So after graduation he returned to Johannesburg and taught for a year while continuing his discernment. “There was a need for priests in my city, a scarcity of priests, and the Bishop was calling for young men to step forward,” he recalls. “That’s when I put two and two together. ‘Why don’t I give it a try?’ I thought. And so that’s what I did.”

In August 2011 Fr. Deneys became a seminarian for the Archdiocese of Johannesburg. He then spent five years in Rome, where he completed his philosophy studies and earned a licentiate in sacred theology at the Pontifical University of the Holy Cross before returning to South Africa this past August.

The day after his ordination, Fr. Deneys offered his first Mass at the church where he now serves as curate, or assistant priest, “a large, active parish,” Johannesburg’s St. John the Apostle. Only weeks into his priesthood, he is already busy offering Masses, hearing confessions, leading catechetical programs, and providing adult formation and spiritual direction.

St. John the Apostle is a multicultural parish, reflecting both South Africa’s diversity and the legacy of the country’s troubled history. “I was born toward the end of Apartheid, and grew up in post-Apartheid South Africa, so I don’t know what it was like living under the policy of racial segregation, but it’s clear that the scars and wounds still remain,” Fr. Deneys reflects. “The Church, however, can play a big role in helping the country to heal.”

Citing the Second Vatican Council’s dogmatic constitution Lumen Gentium, he notes that the Church is called to be a symbol, or reflection, of the unity of the human race. “If you translate that to our situation in South Africa, our job is to show that it is possible for people of different cultures to live together, that we can live together, that our relationships go deeper than skin color,” he says. “We are all brothers and sisters in Christ, because His blood flows through all of us.”