Every year, Westerners purchase billions of dollars of Christmas decorations, from crèche scenes to inflatable reindeer, imported from China. What do the artisans who make these goods think of them? Do they know what Child this is, Whom we are celebrating and why? And if they do — there are an estimated 44 million in Christians in China, as many as 12 million of whom are Catholic — are they free to celebrate Our Lord’s birth and share the news of His incarnation? Or does religious suppression compel them to keep quiet the faith depicted in their handiwork?

Published by Sophia Institute Press, Christmas Blossoms tells the story of Zhang Jian, a Chinese glass painter. “This man has been in my imagination for many years,” Mrs. McCaffrey recently recounted in an interview on the CFN Live television program. (See player, above.) “He is an artisan who was born before the Communist revolution and raised by a Catholic family, so he understood the sights, sounds, and smells of Christmas. Many years later, when he is in a workshop and he is called to paint ornaments for Christmas, he’s someone who understands the real meaning of Christmas, so his ornaments are very beautiful and very sincere.”

Although accessible to readers in middle school and older, Christmas Blossoms deals honestly with some of the harsh challenges confronting the world today, including commercialization and political repression. “It’s a different story,” Mrs. McCaffrey explained on the Catholic Community Radio Wake Up! program. “As I tell people, there’s not a lot of fa-la-la in it.” 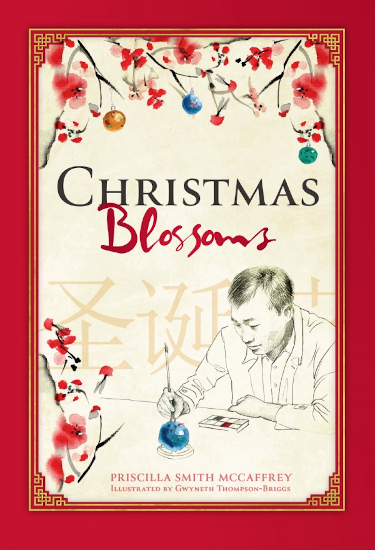 Yet there is much hope. Through his work and his art, Zhang is able to share his faith with his colleagues, reminding readers that the promise of Christmas shines bright in any time or place. “What I wanted to bring out is that you can live with hope even in the most dire situations,” Mrs. McCaffrey observed on CNF Live. “Your hope can be life-giving to other people, and even if they can’t grasp all the reasons for your hope, that’s something that can be communicated.”

Mrs. McCaffrey previously worked as a research assistant for Servant of God John Hardon, S.J. (the College’s 1981 Commencement Speaker) while studying Sacred Doctrine at St. John’s University.  She then taught in Catholic schools before marrying writer/publisher Roger McCaffrey and homeschooling the couple’s four children, including Frater Raphael (’17), a seminarian at St. Michael’s Abbey in Silverado, California.

Her first published book, Christmas Blossoms is accompanied by beautiful illustrations inspired by the sort of Christmas ornaments that Zhang Jian paints in his workshop.  The book has received widespread critical appraise, including that of Joseph Cardinal Zen of Hong Kong. “In this charming novel we are reminded of the flavor of Christmas even during so difficult times, like the ones of the cultural revolution in China,” His Eminence remarked. “We have always to look at the Lord, even when we are in deep trouble, He is our strength and our hope.”