Running in the Footsteps of the Saints: Elizabeth Mazza (’16) 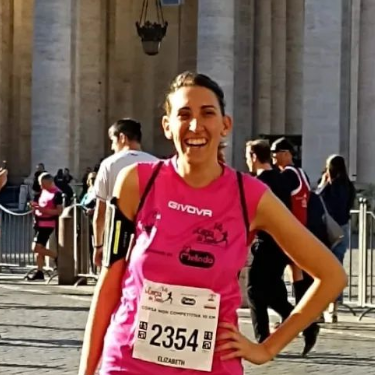 Though St. Paul’s exhortation, “Run so as to win” (1 Corinthians 9:24), refers to the spiritual race for heaven, Elizabeth Mazza (’16) decided to take it literally. On All Saints’ Day, she joined more than 2,000 contestants in the 14th annual 10K Race of the Saints in Rome, known to denizens of the Eternal City as the “Corsa dei Santi.” Runners passed the Colosseum, the Spanish Steps, and other Roman attractions, treading the same ground that so many saints have walked for millennia.

Miss Mazza has been an adopted Roman for a few years as a graduate student in theology at the Angelicum, from which she recently graduated with her S.T.B. Living and breathing the words of the saints as a theologian, this year she decided that, by running the Corsa dei Santi, she could encounter the saints in another fashion.

“Running a race pushes us to do something that we are made to do,” she told the Catholic News Agency. “But it’s not necessarily easy. You know, God made us for health in mind, body, and soul. Running that physical race course reminds us of the physical excellence that God made us for. But it also pushes us toward spiritual excellence.”

The pursuit of such physical and spiritual excellence on November 1 was, indeed, a pursuit — and an exhausting one! “Running a race like this completely humbles you and makes you realize that you can’t finish it without God’s help.” Ever the theologian, Miss Mazza highlighted the spiritual lesson of her run. “That’s the most fundamental thing. You’re just running. It’s just you and God, and only His grace sustains you to the end.”

Whether steeping herself in the words of the saints or running in their footsteps, Miss Mazza credits her zeal to the example of the tutors at Thomas Aquinas College. They “taught me what it meant to be a true Catholic theologian, to have the humility to find the Truth and the courage to fight for it, in faithfulness to the Church and her mission. I hope to do them proud.”