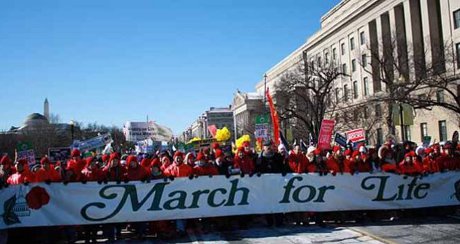 As a demonstration “that commemorates those lives snuffed out before seeing the light of day,” the annual March for life, writes Sean Fitzpatrick (’02), “is, perhaps first and foremost, a funeral march.” The headmaster of Gregory the Great Academy in Scranton, Pennsylvania, Mr. Fitzpatrick has penned a poignant and thoughtful reflection about today’s march for Crisis magazine, where he is a regular contributor. He observes:

“The March for Life is a witness to the Gospel of Life, demonstrating by the thousands that though abortion is common practice it is not common sense. The March is a positive outcry against the government’s failure to defend the defenseless and to protect women against the tortures of conscience. Abortion is not simply a failure of justice, but a failure of government itself. President Washington wrote in 1789, ‘The administration of justice is the firmest pillar of government.’ When that pillar is compromised, the structure fails and falls. It is not out of the question to ask, ‘Who will be the next to lose their unalienable right to life, liberty, and the pursuit of happiness?’ In a statement given one year ago on this day to mark the anniversary of Roe v. Wade, President Obama said, ‘this is a country where everyone deserves the same freedom and opportunities to fulfill their dreams.’ But at what point, at what precise point, does everyone become someone? Whenever it is, it is no longer self-evident.

“It is not enough to demand justice. Justice, as Our Lord taught, is to be hungered and thirsted after as a means of wellbeing. Just as hunger and thirst can never be forever satisfied in this life, neither can the requirement for the divine gift of justice. This is the truth that beats out the march of Christian soldiers. Though they mourn on this day as they march on the National Mall, they do it in the happiness and blessedness that is their claim, in honor of the dead.”

The full article is available via Crisis.com.