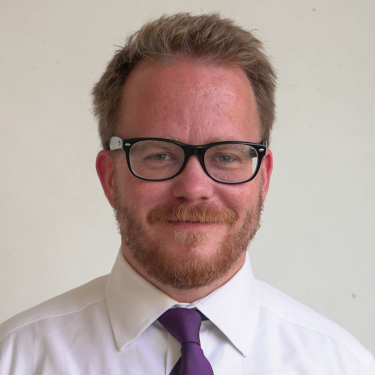 Walk into St. Joseph Commons during lunch hour, and you are likely to see Daniel Selmeczy (’08), sitting amid a group of students, avidly conversing about their studies and their goals. A student was once overheard asking, “When does that guy ever stop working?”

It’s a fair question. Dan is Thomas Aquinas College’s first full-time college and career advisor, having started last fall, and he is passionate about his work.

After his family escaped Communist Hungary when he was still a baby, Dan grew up as an atheist in Northern California. He first stumbled upon the College by chance in high school, when a friend suggested he could stay on the California campus while visiting other schools in the area. Those few nights, however, would soon turn into four years.

“The students all had interesting things to say when I asked them about language, or matter and form, or justice,” he recalls. “And the camaraderie that I saw in the dorm — I really wanted that.” So Dan entered the College as a freshman in 2004, and he entered the Catholic Church at the next spring’s Easter Vigil.

With a background in ballroom dance, he made a splash on campus, balancing his studies with the dance workshops he led for fellow students on weekends. When it came time to graduate, he knew he wanted to go into teaching, but wasn’t sure which kind. “It was always a debate between academic teaching and teaching dance,” he says.

Providentially, Dan was able to choose both. The summer after his graduation, he returned to the College to teach dance as a prefect on the High School Summer Program. Then, that fall, he began teaching Latin at St. Monica Academy in Pasadena. He would continue this arrangement for the next 13 years — only last summer, after serving as a Summer Program prefect on both coasts, he married his wife, Mary, and then began his new position at the College.

Working so many summers on the High School Program soon made Dan a resource for younger prefects, who would come to him for direction and advice. Through these exchanges, he developed a gift for counseling that serves him well in his new position.

“The most exciting part of my job is being able to have powerful conversations with students and help them make decisions about what work they would like to do,” he says. “So I lead them through exercises where we talk about their past experiences and try to hone in on a couple of areas, and sometimes something very concrete emerges.” From there, he assists students in finding summer internships and work related to their desired fields. “That aids them not only in their discernment, but also in getting experience that they can add to their résumés or maybe even getting a foot in the door at a company that they would like to work for after they graduate.”

Connecting students with alumni and parents is key to the process. “It helps the students a lot to talk with our alumni,” Dan says. “Even just a half an hour’s conversation with a professional who works in the field can make all the difference for someone who is trying to break in.” Speaking to graduates who have found success in a wide range of areas also helps students become more aware of the opportunities available to them.

“The work that students do here can set them up to be successful in areas that they might not expect,” Dan says. “When you learn how to speak well, and you know how to listen, and you know how to learn difficult material quickly, even if you don’t yet have the particular skills for a given job, you have what it takes to learn them. Being able to reason and communicate well is a valuable foundation upon which to build further success.”