“When you’re a Dominican, you could be a college president one day and in charge of the kitchen the next.” Good daughter of St. Dominic, Sr. Thomas Aquinas Halbmaier, O.P. (formerly Laura, class of ’84 , knows well the charism and spirituality of her order. “We’re all the same before God; nothing we do in the lives of our apostolates affects how we live in our home.”

From 2002 to 2007, Sr. Thomas Aquinas was the president of Aquinas College in Nashville, Tenn. She is a member of the Dominican Sisters of the Congregation of Saint Cecilia (otherwise known as the Nashville Dominicans), which owns and administers the college.

The college first began in 1928 as St. Cecilia Normal School for the education of the Sisters, and was replaced in 1961 with Aquinas Junior College. In 1994, it became a four-year college and is one of the very few Catholic colleges south of the Mason-Dixon line, and one of the few colleges anywhere owned and administered by a women’s religious community. 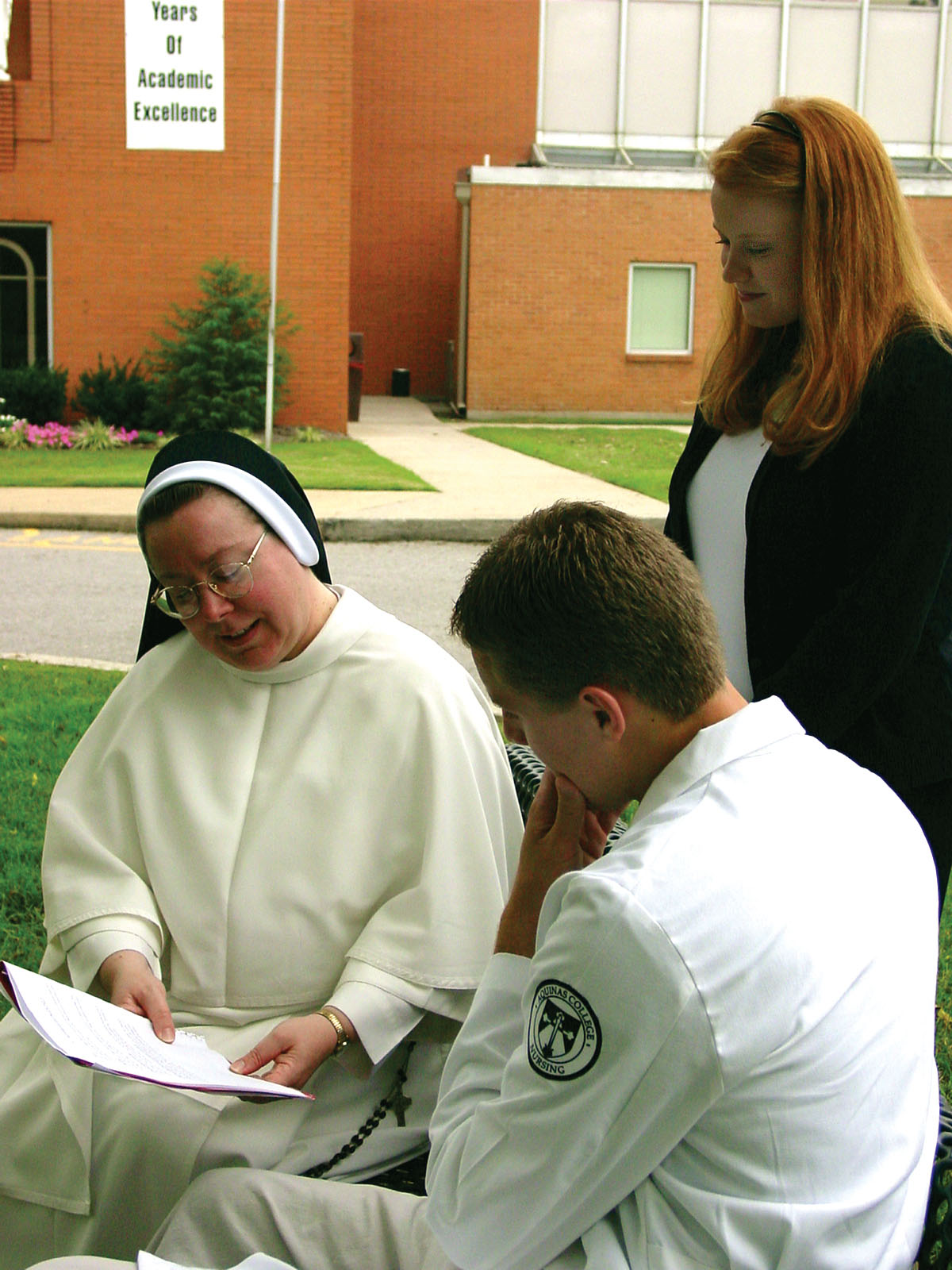 The non-residential urban campus has about 800 students in day and night-time programs in four principal areas: business, nursing, teacher education, and liberal arts. Fundamental to each of these programs are core requirements that reflect the Sisters’ commitment to faith-based education — courses in ethics, philosophy, and theology. The Sisters have long been formidable educators and have changed many lives through education. Their new four-year College is now rising to a new level.

As chief promoter of her congregation’s vision for the college, Sr. Thomas Aquinas worked to make a college with largely secular degree programs distinctively Roman Catholic. Her first major initiative as president was to undertake an exhaustive review of the college’s curriculum and to bring it within the scope of Ex Corde Ecclesiae, Pope John Paul’s Apostolic Constitution on Catholic colleges. As Catholics comprised only 20 percent of the student body and 3 percent of the city, such an undertaking may have seemed risky. “We want to do the right thing, rather than follow some path of least resistance,” she said. Sr. Thomas Aquinas also initiated faculty- and staff-wide meetings to promote an understanding of the identity and mission of Catholic higher education.

Sr. Thomas Aquinas joined the Nashville Dominicans in 1989. Her order is among the fastest growing in the world. Between 18-22 women arrive each year to test religious vocations. “Our Order has always stayed at the heart of the Church and has lived the consecrated life accordingly,” she said. “We’re homegrown American women, cultivated with the sense of graciousness and femininity that is characteristic of the South.”

Their lives are austere; their work, demanding; their formation, comprehensive. They wear the white, full-length Dominican habit and they follow monastic customs of silence and reading at meals. At the same time, they often maintain heavy teaching loads. “Teaching is a very demanding profession in itself. Balancing that with the contemplative life is really a high-wire act for us.”

Sr. Thomas Aquinas was born and raised in Orofino, Idaho, the eldest of five children. She attended public schools, graduating from high school as valedictorian and president of her junior and senior classes. She came to Thomas Aquinas College, thanks to a referral from Catholics United for the Faith, and absorbed the life of the school.

“After my own upbringing, my time at Thomas Aquinas College was the most formative of my whole life — even more so than in my novitiate, because it formed my whole way of thinking. The College taught me not just what to think, but how to think, and this was the foundation on which my religious life was built. So, joining the Dominicans was second nature to me. I never used to think of St. Thomas as being a Dominican. But in hindsight, I see that the life and thinking at the College is very Dominican. They are both ordered to study for the sake of truth.

“When St. Dominic founded the Order of Preachers, it was the first order ever founded for public preaching. That had been the domain of the bishop. But because so many preachers were so uneducated, the Church saw a need for an order devoted to study and preaching. So dedicated was the Order to this goal, that the rule allows dispensation from prayer and community life for the sake of study. The point is: You have to get the thinking right if you’re going to preach; you can’t preach what you don’t know, love, and believe. Of course, the Order is also about personal holiness and the conversion of souls, but the emphasis on study is what makes it unique.” 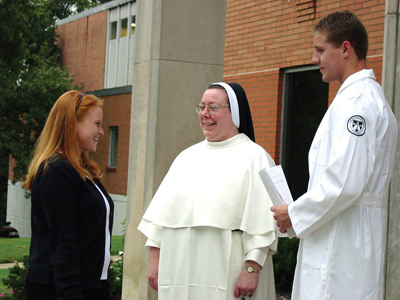 This emphasis on the intellectual life is what attracted her to the Order. Also, she found the vows consonant to her. “I had been raised to be obedient and chaste. And since my father was a public school teacher, we were poor, too!”

She had thought on and off about a religious vocation since high school. After graduating from the College in 1984, she thought that teaching in a Catholic school might help her decide if religious life was for her.

It didn’t help. She moved to Washington, D.C., for three years and engaged in fundraising work for prolife political action organizations. In 1987, the College recruited her to help with its own fundraising efforts.

Her younger sister, Susan, was a junior at the College then and struggling with a vocation dilemma — whether to stay and graduate or whether to leave and join the Nashville Dominicans. When Susan decided to leave, Sr. Thomas Aquinas thought she was “off the hook” — “I thought God took only one religious vocation from any given family.” She had met various Nashville Dominicans over the years, but nothing had convinced her the Order was for her. The following year, she visited Susan (who eventually took the name Sr. Mary Aquinas) in Nashville and realized: “This is my home; this is where I’m supposed to be.”

Taking her college’s namesake for her own religious name, Sr. Thomas Aquinas spent four years in the novitiate, learning the rule and teaching high school. (She was amazed to find that her Thomas Aquinas College transcript certified her in Tennessee to teach mathematics, religion, and physics.) She became certified in history after taking graduate courses for a year at Middle Tennessee State University, and taught for three more years. In 1998, the Order sent her to The Catholic University of America to obtain a doctorate in philosophy and then return with the ability to teach in a new comprehensive intellectual formation program for the Sisters. The program, established by Fr. Brian Mullady, O.P., included a four-year summer cycle of studies in logic, philosophy of nature, philosophy of man, metaphysics, modern philosophical problems, the Trinity, sacramentology, ecclesiology, and moral theology.

After completing her course work, she returned to Nashville in January, 2002, as Vice-President of Operations at Aquinas College. In May, she was assigned the presidency. Something she asked for? “No. We receive our assignments, we don’t negotiate them.”