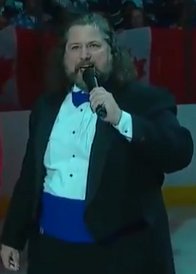 The Vancouver Sun recently ran a profile about Mark Donnelly (’89), who is famous in parts north for leading crowds in the singing of “O Canada” at Vancouver Canucks’ home games. But rousing the fan faithful is not his only talent:

With a degree in music from UBC and a liberal arts degree from Thomas Aquinas College in Santa Paula, Calif., he worked for a parish in Scranton, conducting Gregorian chant and 16th-century polyphony (counterpoint), his specialty. He also taught logic, ethics and introduction to philosophy at a seminary, as well as coaching hockey, which he has played since he was 12. …

He also teaches voice, sings professionally and conducts the chant and polyphony at Holy Family Church in Vancouver. “It’s crazy,” he says. “The practical thing for me has always been music, and that’s how I’ve supported my family through the years.”

Mr. Donnelly and his wife, Catherine (Becher ’87) are the proud parents of nine children in a family that shares his love for music:

The family that plays together also sings together. Most of the children sing in the church choir, and Donnelly has recorded a CD with the three eldest, Sean, Colleen and Theresa. He kept getting requests to record a CD of the anthem, but since two songs are not enough for an album, they recorded 16 Christmas carols, plus the American and Canadian anthems.

The CD can be heard/purchased at Mr. Donnelly’s website, but to experience his spirited rendition of “O Canada” at its best, see the video below of his performance before game 5 of this year’s Stanley Cup finals. As Mr. Donnelly explained to the Sun, “An anthem’s not a solo. It’s for a group of people, and a national anthem’s for a nation full of people.”