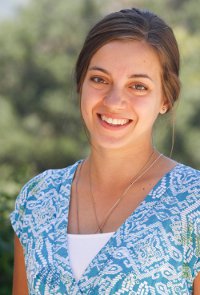 Sarah Rivera (’15) may not have composed a song about the High School Summer Program, but at the most recent meeting of the College’s Board of Governors, she talked about how those two weeks on campus changed her life. Below is an excerpt from her address:

“My Thomas Aquinas College experience started in an unorthodox way. I had not even heard of the College until my junior year of high school. I was looking at some big state schools and some Catholic schools, and I was seriously considering Princeton and Harvard. To further my chances of getting into these schools, I wanted to do a college summer program between my junior and senior years in high school. So I googled ‘programs for high school students at colleges,’ and then scrolled through pages of search results. On page 23 was TAC. I saw that the application was short, so I fired it off and moved on.

“I was accepted to both TAC’s summer program and Harvard’s, but Harvard’s cost around $10,000, so my parents said, ‘You’re going to TAC!’ At that point I took another look at this college to see where I would be spending two weeks. I saw ‘Socratic Method,’ and didn’t even know what that was. I saw that the College offered the Latin Mass, and I freaked out a little bit. I got a packet in the mail that spoke about a dress code, and I freaked out a little more. This was like nothing I had ever experienced. I told my parents I wasn’t going. They used their parental authority and said, ‘Yes, you are.’

“So I came to the Summer Program and something totally unexpected happened: I fell in love with this school. The texts we read and the classes were amazing. My tutors were bringing up ideas that I never would have come up with on my own. And then my classmates also began to think of and draw new notions out of the text. Whenever the tutor asked a question, there would, at first, be silence, but then we would realize that it was up to us to think through the matter for ourselves. It was, indeed, like nothing I had ever experienced..

“Then there was the joy of being immersed in the spiritual community of the College, to see students who were alive in their faith, who were making use of the Sacraments, who really cared about what we were learning. These weren’t the boring, stuffy people I was expecting. They were smart, friendly, and attractive people who were going to go out into the world and do good things. To see that there was a place that was fostering such people, almost as its mission, was life-changing.”