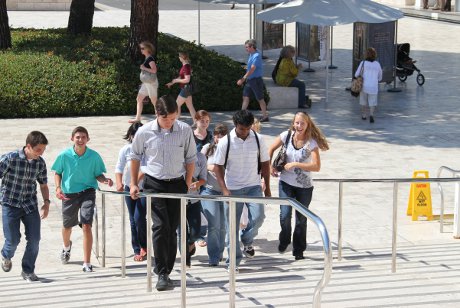 Tuesday morning classes began at 9:30 a.m. with students demonstrating their first Euclidean propositions on the chalkboards for their classmates. Though many were nervous about approaching the board for the first time, the general consensus was that the propositions went well. With the ice now broken, they should go even better through the end of the week!

After class, Mass in the Chapel, and a quick lunch, the students boarded buses for the Getty Center Museum in Los Angeles. There they enjoyed a spectacular collection of paintings, sculptures, tapestries, and illuminated manuscripts. At about 5:00 p.m. the group re-boarded the buses for a trip to the Hollywood Bowl, where all enjoyed pizza and other refreshments. They then settled in for an excellent concert under the stars that featured Brahms’ 2nd Piano Concerto and Elgar's "Enigma Variations." The concert ended fairly late (about 10:30 or so), at which time students returned to campus and went to sleep to be well-rested for Wednesday's classes — more Euclid in the morning and Boethius in the afternoon.