Thomas Aquinas College Founding President Dr. Ronald McArthur often tells of an exchange he once had with a student many years ago when the student wanted to know who might have the answer to a very difficult philosophical question. “Well, you would go ask your bishop for the answer,” he replied.

“Then you would ask the Pope.”

“What if the Pope doesn’t know?”

“Well, you would have to ask God.”

The student couldn’t resist. “What if God doesn’t know?”

“Then,” said McArthur, “you would ask Mr. Berquist!”

This apocryphal account well describes the reputation College founder Marcus R. Berquist had among so many of his students and colleagues — astounding in his comprehension of Aristotle and St. Thomas. Yet, for the soft-spoken, scholarly-looking son of a farm equipment manufacturer from St. Paul, Minnesota, it is a reputation from which he cringed. “I just happen to love philosophy,” he would say.

Mr. Berquist’s interest in philosophy was kindled during his fifth year at Nazareth Hall, a minor seminary of the Archdiocese of St. Paul, when he heard a lecture on the doctrine of Mary’s bodily assumption into Heaven by renowned Thomist, Dr. Charles de Koninck, who was visiting from Université Laval in Quebec. “It was the first time I had ever heard someone explain a doctrine of faith that was derived from evidence and principles, rather than simply state something which was an article of faith or a teaching of the Church.”

Mr. Berquist followed his older brother, Dick, to the College of St. Thomas in St. Paul, studying philosophy and graduating in 1956. He then went to Laval to study under de Koninck, where he acquired a lifelong love for Aristotle and St. Thomas. He obtained his licentiate in philosophy in 1958, and while he completed all coursework necessary for a doctorate, he never produced his dissertation. “I did not have the pressures married men have to finish it,” he remarked. “So I put it off.”

Through Dr. de Koninck, Mr. Berquist was recruited to teach philosophy at St. Mary’s College, Moraga, where he met and befriended Dr. McArthur, also a former de Koninck student. In 1963, when changes in administration loomed on the horizon, the tenured McArthur suggested the non-tenured Berquist seek haven at Santa Clara University. For three years he then taught in its honors program until Dr. McArthur urged him to return to St. Mary’s because the administrative climate seemed more favorable. Joining Mr. Berquist from Santa Clara was another Laval-trained philosophy instructor and friend of Dr. McArthur’s, Dr. John Neumayr.

From 1966 to 1968, Mr. Berquist, Dr. Neumayr, and Dr. McArthur taught at St. Mary’s and began to collaborate on forming a college of their own. In the summer of 1968, Mr. Berquist and Dr. McArthur began what would become the founding document of Thomas Aquinas College. Dr. Neumayr and Dr. McArthur set up shop at the Dominican College at San Rafael where they revised the document and made plans to implement it; Mr. Berquist went to the University of San Diego to bide time until the College was up and running. When the College opened in 1971, he commuted weekly to teach part-time. He joined as a full-time tutor the following year — just after having received tenure at USD.

By joining the faculty of the new College, Mr. Berquist gained more than just the opportunity to teach philosophy. He met his wife, Laura, one of the students at the College. The two were married the summer after her graduation, on his birthday and on what would have been his parents’ 50th wedding anniversary. Mr. and Mrs. Berquist would go on to have six children, all of whom are graduates of the College

Mrs. Berquist would soon become a celebrated homeschooling author and the founder of Mother of Divine Grace School, a distance-learning program for which her husband served as a tireless adviser. In 2009 she and Mr. Berquist jointly received the Paideia Prize for their lifetime of contributions to the cause of classical education.

Asked in 2001 whether he still discovered new insights into Aristotle and St. Thomas, Mr. Berquist replied, “Oh, yes! I continue to discover new things — things that I didn’t know before, and things that I thought were right before, but now I see are wrong. The pursuit of knowledge is inexhaustible.” In his latter years, however, he was drawn more to theology. “I guess that’s fitting,” he once said. “My interest in philosophy started with the Assumption. Now, after having spent all these years in philosophy, I find myself using it to go back into doctrines like the Assumption.”

“The Teacher to Whom I Owe the Most”

In the early hours of November 2, 2010 — All Souls Day — Mr. Berquist passed away from complications arising from lymphoma. “Mr. Berquist died a holy and peaceful death,” observed President Michael F. McLean. “College Chaplain Rev. Cornelius Buckley, S.J., had anointed him the prior afternoon, and his family was praying the rosary by his bedside.”

Indeed, the prayers had begun weeks earlier, with friends and alumni of the College mounting vigils in his behalf. The prayers continued with a rosary and an all-night vigil in Our Lady of the Most Holy Trinity Chapel on the eve of his funeral and, of course, a requiem Mass itself. In the subsequent days, several alumni priests also offered Masses across the United States.

“I could not have conceived of being a part of a new college without knowing that he was one of us,” recalls Dr. Ronald P. McArthur, the College’s founding president. “We could rely on him to keep us securely grounded in the study of Aristotle and St. Thomas, without which our college could never have achieved its purpose.” Says Dr. Glen Coughlin, a longtime tutor at the College who was one of Mr. Berquist’s students in the late 1970s. “I have always considered Mark to be the teacher to whom I owe the most. I learned from him to think carefully; to proceed one step at a time; to identify premises which are certain; and to build on them slowly, deliberately, and therefore confidently.”

“Remembering Mr. Berquist gives us an opportunity to think back to the early days of the College and the prescience of its founders,” says Dr. McLean. “We who carry on their legacy are among the many beneficiaries of their courage and sacrifice.” Adds Dr. McArthur, “I know that Mark will continue to live as long as Thomas Aquinas College — so much the result of his own life and example — shall remain in existence.” 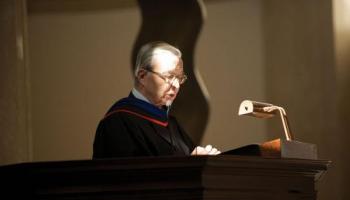