Ten years after his graduation from Thomas Aquinas College, Jerry Lademan (’09) returned to the California campus on Saturday for an altogether different sort of ceremony.

Now an officer in the United States Marine Corps, Capt. Lademan had come to Commencement 2019 to present a commission to two of this year’s graduates. Only minutes after their own graduation, Tom Macik (’19) and Patrick Nazeck (’19) returned to the stage at the foot of the academic quadrangle. There, surrounded by family and classmates, Mr. Macik and Mr. Nazeck became 2nd Lt. Macik and 2nd Lt. Nazeck — newly commissioned Marine Corps officers. 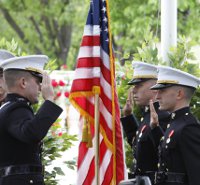 “For the past four years, Thomas and Patrick have studied works of the greatest minds in history, in the proud Socratic tradition of free intellectual exchange and dialectical learning,” said Capt. Lademan. “Now they are acting on the knowledge that they have been privileged to gain by pledging their time, talents, and lives in defense of our great country. They have gained the beginning of wisdom and have chosen how they will use, and protect, what they have gained.”

Over the summer vacation between their junior and senior years, the two classmates traveled to Quantico, Virginia, for 10 weeks at the U.S. Marine Corps Officer Candidates School. There they underwent a relentless regimen of physical exertion, sleep deprivation, and constant evaluation intended to induce stress. The purpose of these trials, according to the school’s mission statement, is to ensure that candidates “possess the moral, intellectual, and physical qualities for commissioning, and the leadership potential to serve successfully.”

Clearly the new Thomas Aquinas College graduates passed muster, as evidenced by the delegation of Marines who accompanied Capt. Lademan to present their commissions from the President of the United States. These included fellow alumni Sgt. Benedict Coughlin (’15) and 2nd. Lt. Thomas Matthews (’17). Also on hand for the occasion was 2nd Lt. Nazeck’s father, Petty Officer Mark Nazeck, USN, Retired.

The new officers will next report to Quantico, Virginia, for six months of additional training at the Basic School, followed by more specialized training, before leading their first units in the Fleet Marine Force. “This is not an obligation upon which they enter into lightly,” said Capt. Lademan, citing their study, while at the College, of the country’s founding documents. “They, more than many of their peers who are getting commissioned into the Armed Services across the country, now enter into this sacred obligation with full knowledge of the origins and basis of their service. They have a firm understanding of the common goods of our country and our religion, and have made the conscious choice to defend them.”