Note: Shane O’Reilly (’95), the staff vice president for corporate sourcing at Anthem, Inc., was the honored speaker at the College’s West Coast Alumni Dinner on June 3, 2017. The text below is adapted from his remarks.

So that was a great speech. Maybe you should be giving this one. You’re promoted! 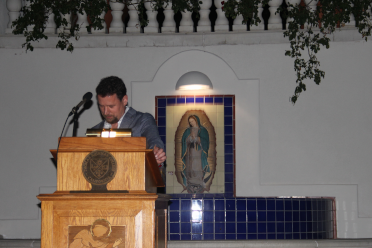 I’m very humbled, truthfully, to be standing here. To be recognized by TAC in any way, to me means a lot. I’m humbled and I’m grateful. I’m grateful because this place has had an amazing influence on me and on my life. It has formed my intellectual thinking (to the extent to which I’m capable), and it was my spiritual foundation, as well. I met my wife here, and I have a couple of my daughters here with me tonight. Most of my family or good friends are either graduates of the school or are closely associated with TAC.

I’m grateful for the times that Paul and I would hang out in his office after seminar and have a drink. (That’s not true, by the way, but I thought I would say that because I like the idea of that!) Paul, it’s not true that I would drink in your office; that’s not true; I would never do that because that’s against the rules.

The reality is that I’m here for two other reasons. One is that I’m selfish, and the other is that I’m a skeptic. I’m selfish because I remember being here as a student and realizing there was a lot of great talent here. So those in my class, the men and women in my class, I remember thinking when I was there, “Wow, a lot of these individuals are really talented — and there’s no one here — no companies here — trying to take them.”

So when I found myself in a position to be able to hire, I thought, well, this is just smart. There’s supply and demand; I need good talent, and the most important thing for the success of a company — even a company as large as Anthem (Anthem does $80 billion/year) is the talent within that company. So what I’ve done is — all I’ve really done is — come back to take the talent. And my goal has been to take the talent and pay them a lot of money so they can’t leave. Put handcuffs on them. So, Pete, you’re never leaving, especially after your next promotion.

So the reality of it is that there’s been a lot of competition. We put our TAC graduates through a rigorous assessment program. They go through the same program that everybody goes through. They have to fill out case studies; they have to go through interviews (we ask a lot of weird questions — I won’t go into all those). We don’t take it easy on them. And quite honestly, I don’t even hire them; it’s the people who work for me who do the hiring. And they hire the TAC graduates because they’re capable. It’s not just that they have some attributes and can fill out some PowerPoints and those sorts of things. The reality is that they’re eager, and they’re willing to do the work. A lot of the other institutions — they’re smart kids and they come in, but they want specific assignments. Our graduates are willing to do what is necessary, and they apply their intellect to the assignment. On top of that, they have a kind of ethic and a kind of trustworthiness which are just not the same elsewhere. I could tell you stories about that… The reality is that they’re better.

One of the things that we’ve brought up is that they’ve succeeded not only through the interview process and been hired and done well, but — and Mark mentioned this, but it’s worth having another emphasis — the “Top 30” award that Pete won says that that guy is one of the 30 best for his age group in the nation for what he does. That’s without any training at all in the field which he went into. And that is really, simply remarkable. And  Kayla (Kermode ’12) Six the year before — the same thing!

The message here for me is this: The College is known for the theoretical capability, for living the intellectual life, and I’m here to stress that it is also an institution that has direct practical application, and to such an extent, that it is better at that than those institutions that are dedicated to just that cause.

The other reason I kind of spend some time coming back to TAC is that I remember what it was like being a graduate, and I know the stories of many different graduates — it’s kind of a difficult journey for many of them. They live here in an almost womb-like environment and they kind of come out, and it’s a very difficult transition. And so for me it’s been a great part of my job. We work for a big company; we save a lot of money; we improve things; and there’s lots and lots of dollars and cents. But the reality of it is that for me the thing that gives greatest job satisfaction is hiring good people, and mentoring good people, and seeing those people succeed and make a difference. And this difference relative to Anthem is healthcare, and that ties to people’s lives. So for me, it is nearly a vocation.

I want to thank Mark Kretschmer, because the reality is that from where it was in terms of placement per student when I was a graduate, to where it is now, is radically different. Mark and Paul — though I make fun of you sometimes — you have been exceedingly helpful to me, and I’m very grateful for  you, as well. Those two guys — Mark, building a program; and Paul, helping me to pick students who are interested in business — they’ve done such a great job.

I have just a simple message for the alumni who are here today: I just want to say that to the extent that you would also choose to get involved in helping the students, I would encourage it. It’s been for me something that has given me great joy.

To the extent that other companies that are hiring don’t come [to recruit] — that’s fine with me, because I’ll just continue to take the good graduates. The reality is also, at the end of the day — this is also for the students as well — I was a very  average student here. Some people from my class who are here [know] that’s really true. I’m probably talking more tonight than I did in some of my classes for the whole four years. So the reality is that even the average person can amount to something. It’s a message of hope.

Thank you very much.