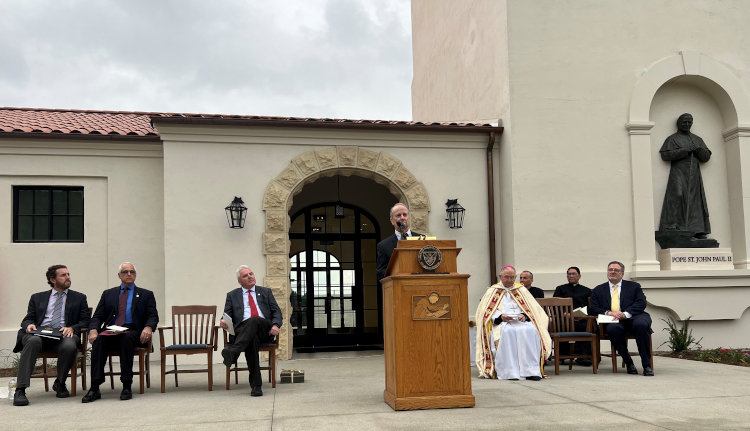 On October 22 — the Feast of Pope St. John Paul II — the Most Rev. José H. Gomez, Archbishop of Los Angeles, dedicated the newest building at Thomas Aquinas College, California — one named in the beloved saint’s honor.

Shortly after the luncheon celebrating the inauguration of Dr. Paul J. O’Reilly as the College’s fifth president, members of the College community made their way to the Pope St. John Paul II Athletic Center on the southwestern corner of the campus. Trustees of the Fritz B. Burns Foundation of Los Angeles, whose $15 million grant funded the building’s construction, joined His Excellency and College officials to celebrate the completion of the Athletic Center, which had a soft opening last spring.

From a podium just outside the Athletic Center’s entrance — and standing before a statue of its saintly patron — Dr. O’Reilly acknowledged the architects, contractors, and craftsmen who all played important roles in bringing the building to fruition. “But none of this could have been possible without the generosity of the Fritz B. Burns Foundation,” he added. “It was the Foundation’s goodness, kindness, and trust that made this Athletic Center possible. It was also the Foundation that suggested we should name it after John Paul II, a wonderful choice.”

Dr. O’Reilly went on to describe the late Mr. Burns as a “visionary businessman and devout Catholic who made his first gift to the College in 1971, when we were first founded.” Over the past 50 years, his foundation has been one of the College’s “most faithful and generous” benefactors. Thanks to its trustees’ support of the College’s mission, the Foundation has enabled the development of the California campus by funding St. Cecilia and St. Gladys Halls, as well as contributing to four other buildings. “We are honored to count them as friends,” said Dr. O’Reilly. “I ask you to keep them in your prayers.”

After his introductory remarks, Dr. O’Reilly welcomed Archbishop Gomez and Rex J. Rawlinson, the Fritz B. Burns Foundation’s president, who took to the podium. “I am a very lucky man to be a part of a project like this, named after the great Pope St. John Paul II, a magnificent athlete,” Mr. Rawlinson said.

“A lot of places you go, they start a project, and then they start padding all the costs, and pretty soon things are out of hand, and then they want more money, and so on,” Mr. Rawlinson continued. “Thomas Aquinas is not like that. They plan everything out, and they come in within budget, and you get more than you thought you were going to get. And that’s what this facility is. You walk around this facility, and we are getting great value for our money.”

The next speaker, Assistant Dean for Student Affairs Dr. Travis Cooper, spoke about the important role that the Athletic Center plays in the life of the College’s students. Describing TAC’s four-year program as a “great adventure in pursuit of wisdom under the guidance of the Catholic faith,” Dr. Cooper observed that, in the new gymnasium, students will train their bodies, refresh their minds, and discipline their souls to better prepare them for the work of Catholic liberal education. “The body and soul,” he explained, “work in concert.”

Archbishop Gomez then offered a prayer of blessing, accompanied by two appropriately themed readings —1 Corinthians 9:24-27 (“Run so as to win”) and Psalm 100 (“His steadfast love endures forever”) — before sprinkling the building’s walls with holy water. As Daniel J. Grimm (’76) led the Thomas Aquinas College Choir in a choral interlude, His Excellency continued the blessing inside the building, sprinkling the gymnasium, weight rooms, and locker rooms, as well as the swimming pool outside. “May God, Who brings light to our minds and strength to our bodies, guide us in all that we do,” the Archbishop prayed, “so that each day we may find gladness and friendship.”

In his concluding remarks, Chairman of the Board of Governors R. Scott Turicchi expressed gratitude “to everyone who made this possible,” especially Archbishop Gomez, “all those involved in the tangible aspects of making this project a reality,” and, most importantly, the Fritz B. Burns Foundation. “We are most grateful and appreciative that you support the mission of Thomas Aquinas College that seeks to nurture the whole person: mind, soul, and body.”

Mr. Turicchi noted how Pope St. John Paul II, a champion of sports and physical fitness, “modeled the virtues that come from engaging in such activity” — such as temperance, sacrifice, teamwork, and humility. “While there will be no national championships generated inside this building,” the Chairman quipped, “there will be a lot of great fraternity.”