Cardinal DiNardo: Defending the Human Person in the Public Square 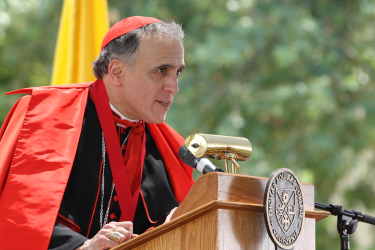 It is a real pleasure to be invited today for this Baccalaureate and Commencement ceremony. I want to thank President McLean for his kind invitation and hospitality. To the Board of Governors, the staff and faculty, and above all to the parents and students, their families and friends, and any alumni and friend donors of this Catholic place of dedication to wisdom: Thank you so much for what you do! I express my gratitude and admiration for your commitment, and I congratulate the seniors as you reach Commencement, a genuine beginning.

The great St. Augustine wrote: Ut esset initio, homo creatus est, priusquam erat nihil. “That there be a beginning, man was created before whom there was nothing.” Obviously St. Augustine did not mean there was nothing created before human beings, only that the very principle of initiating something, of creasing the world in a creaturely purposive way — only that happens when, “male and female He created them.”

Each human being is a great beginning, a unique newness. Education stimulates, disciplines, and beautifies that newness further, so that on a day like this, graduation day, this “beginning” may enter the world ready to shine and serve, contribute and effect things. There is great freedom in this, not the freedom of the runaway let loose on the world, but the freedom of a person sent for the life of the world, and then — as you are made aware of here so frequently — for a life that continues beyond the world’s confines. Thomas Aquinas College is based on and is concerned about the liberal arts; the liberal arts in college education help to prepare a person for freedom — the new beginning. Education helps to draw out the implications that every person is someone new and represents a unique “newness.”

On Faith and Reason

Graduates, your education here has been an intense conversation with great ideas and great persons. The ideas and the people involved endure and have consequence! Not all of the ideas or the people that you have read are necessarily good, but they matter. Reason matters! Your conversation was not just with remembered ideas and past figures. It was a living dialogue with the past and with present interlocutors, with mentors and fellow students.

This is a Catholic college. Its entire curriculum is warmly wrapped in light, as in a robe, says Psalm 104, with the truth and beauty of Revelation, with the Word of God given in the Sacred Scriptures and Tradition, and most especially in the thinking and writing of St. Thomas Aquinas. St. Thomas is the paradigm invitation as a Catholic writer, an invitation not just to thought and wonder, but to the essence and the telos, the sheer gist of things now seen in the light of God, or rather, things not seen now in God’s light, but as light because of their Creator.

At Thomas Aquinas College, faith and reason are celebrated, both in actu exercito and in actu signato, as a harmony. Here, faith and reason are exercised more like a symphony than like a rhapsody. In a symphony, the elements are densely related and compact, orchestrated with precision; but in a rhapsody, the two threads are loosely and arbitrarily stitched together. Think of Beethoven’s Fifth; think of Rachmaninoff’s Rhapsody on a Theme of Paganini. From reading your catalog and listening to you, I think that is what you try to do here with faith and reason. This is an essential obligation in our culture today, and I hope that it has been your delight in your four years here.

To Know Something by its Ends

I admire the College’s syllabus and course descriptions, which I have read about in recent weeks on your website. Graduates, you are to be envied for the synoptic vision which you have received in your education, as well as for the more focused analyses which you have performed with your tutors in the various classes you have taken.

There is a tendency today in education to put an emphasis on making people quick-witted and nimble without knowing the substantial ends of things. Such education produces rational agents, but not necessarily reasonable ones. Anyone who possesses a sheer nimbleness of mind, but lacks an appreciation for the end of things, is a person of vice, says Aristotle in the Nicomachean Ethics. And what does Aristotle say about such people? They are knaves! They are all around today, sisters and brothers. The knaves are invading!

But I have great grounds of hope about the graduates here, since I have read of what happens in courses and tutorials at this college, how being rational here is insufficient; one must also be reasonable and attentive to how words name things by naming them at their best. Res Ipsa Loquitur. This college does that and goes even a step further by naming things in the light of God. Theological mind is welcomed here!

For three years I served as chair of the Pro-Life Committee for the United States Conference of Catholic Bishops. It is a very active committee, with the staff in Washington. I was on the phone every day, and every day something was happening — local, state, national. The bureaucraticization of the human person is going on, sisters and brothers. And if you’ll excuse my vulgarity, it ain’t pretty. You are prepared, though, because of your study, to understand a little more carefully what we must do to combat this problem.

The traditional definition of a person was given by Boethius. He says, “A person is an individual substance of a rational nature,” a spiritual subject. “Person” always refers to an individual and is not exactly a common noun, like “man.” It is more like a demonstrative pronoun — “this.” We normally could say, “I want to show you a man out in the forest.” We do not normally use the expression, “I am going to show you a person in the forest,” do we? A person is a “this.” It is a demonstrative, right here.

A person is a singularity. Initial developments of the understanding of person came about because of Judeo­Christianity, particularly in the problems dealing with Christology and the doctrine of the Trinity. It was in light of trying to figure out the notion of person relative to Jesus Christ that things began to develop relative to the notion of person as applied to human beings. The ancient Greeks knew about spiritual subjects, but they rarely ever talked about person.

Rational and free agents are denoted by the term “person,” but always as singulars. In his commentary on the Sentences, Peter Lombard makes the observation: “Being a part is at odds with being a person.” Jacques Maritain, in his political philosophy, noted that a human being is part of a larger whole, but being a person means transcending any whole. Being a person involves a special kind of agency, one that shows forth understanding and freedom. Because of that, persons are incredibly significant. Yet we are watching in our culture the notion of person being denatured.

In Christianity, within our Catholic understanding, there is also an analogical use of “person,” because the divine is understood as “personal.” The three Persons of the Trinity, one God, are beyond Creation. Creation is an act of complete generosity and love. God has no need of Creation, and even our creaturely desire to praise Him is His gift. But God is personal, and the three Persons of the Trinity are in a total relationship of mutual love and indwelling. Thus, even the notion of the human person is nestled within a larger understanding. Certainly, that understanding is initiated by faith, but it is an understanding nonetheless. This understanding cannot be underestimated, even today, in trying to deal with issues affecting the human person. You are not quite a person, if you know the Christian understanding of things, until you are called and sent by God.

What is the alternative to the Judeo-Christian understanding of person today? No longer is the alternative paganism or even forms of deism. Today atheistic materialism is the major alternative. Atheistic materialism holds that everything is matter in motion. It can be very sophisticated matter in motion, but that is all it is. Christian faith and classical understanding see the holes in that argument. Have you ever read these neo-Darwinian writers? “You know who you really are?” they say in their books, even as they are trying to persuade you. Well, if you are trying to persuade me, why do you need arguments, if I am nothing but matter in motion? In actu exercito, in actu signato.

You are equipped, friends, to start answering the incoherence in this kind of thinking. You have to do it, and you have to do it in your profession, wherever you are going. This cannot be kept just at the theological, theoretical level. In light of Bl. John Paul II, who treated the human person so eloquently in Veritatis Splendor and Fides et Ratio, I propose that you not only keep the tradition in mind, but expand it by going out into the public square.

The current intellectual environment is not healthy. It needs correctives, but also positive enrichment from the kind of thinking you have learned to bring it into the public square. So I am delighted whenever I see a group of young people who are going to graduate and know something more than just what they get dished out of their computers, who are not just nimble and rational, but who are up to good, and are interested in more than just money.

Jesus uses us just as He used the Twelve, and He moves us to understand the human person more. He is going to expect more from you because you know more. You understand more. You have got to utilize the knowledge you have been given, so that our culture can be touched anew by a sense of the human person that is not reductionistic.

Sisters and brothers, it has been an honor for me to be here. Love the truth. Do the good. Allow the beautiful to overpower you, so that when you go forth, there will be a definite creasing of the world, personally, by you all.