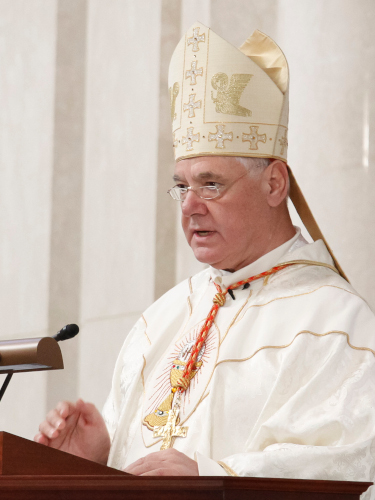 On the Solemnity of All Saints, as members of the Thomas Aquinas College community gathered to honor members of the Church Triumphant, they were joined by one of the preeminent leaders of the Church Militant, His Eminence Gerhard Cardinal Müller, Prefect of the Congregation for the Doctrine of the Faith. “It is fitting that, on this day when we honor those who have lived out the Faith heroically,” said President Michael F. McLean, “we should be blessed to welcome this prince of the Church who is charged with promoting and defending that same faith throughout the world.”

During his short time on campus, His Eminence offered the Solemnity Mass in Our Lady of the Most Holy Trinity Chapel, attended a reception and dinner in his honor, and delivered a lecture entitled, “The Question of God Today.” In recognition of the Cardinal’s lifelong fidelity to Christ and His church, the College also used the occasion to present him with its highest honor, the Saint Thomas Aquinas Medallion. “In light of his weighty responsibilities in the Church,” said Dr. McLean, “it is a great honor for us that Cardinal Müller would travel to California to spend some time at the College and to address our community.”

At that afternoon’s Mass, Cardinal Müller served as the principal celebrant and homilist, joined at the altar by the College’s four chaplains and clergy from throughout Southern California. “In our prayers for each other, we express our communion in faith and love. Invoking the living saints in Heaven, therefore, signifies the insertion of ourselves in the we of the praying ecclesial community, that is the Risen Christ,” said Cardinal Müller in his homily. “The confines of death are overcome, and we are uniquely received in Christ, with Christ, and through Christ in the circle of the living members of the Body of Christ.”

That evening members of the College’s Board of Governors, Boards of Regents, benefactors, faculty, and staff — as well as guests from Order of Malta and the local chapters of Legatus — attended a reception honoring Cardinal Müller in St. Bernardine of Siena Library. The group then joined students in St. Joseph Commons for an All-College Dinner and His Eminence’s much-anticipated address.

“It is always a great joy to be here at Thomas Aquinas College,” began Bishop Barron, who offered the invocation. “Heavenly father,” he prayed, “we thank you above all tonight for Thomas Aquinas College, one of the great liberal arts Catholic colleges in the world. Lord may it always be a place where Your truth, and Your goodness, and Your beauty are conveyed. We thank You tonight, Father, for the presence among us of Cardinal Müller, a link to Pope Francis, a link to the Universal Church. Lord, guide him, protect him in his crucially important ministry.”

In his lecture, The Question of God Today, Cardinal Müller spoke of the secularism and atheism that are increasingly prevalent throughout Western world, and which are doomed by their inability to meet man’s deepest needs. “The atheistic conviction that intellectual history and breathtaking progress of nature and technological sciences, as well as global and digitized ways of knowing, cohesively would lead to total immanentism and secularism is contradicted by the fact that the human being always asks anew and wants to seek the existential questions regarding his origin and destiny,” he said. “The question about a sense of being, and the goal of our existence, thus cannot be dismissed by positivism as devoid of sense or irrational, and hence it cannot be forced to silence.”

Following the Cardinal’s lecture, which received a standing ovation, the entire room, including His Eminence, rose to sing “Happy Birthday” to the College’s long-serving Chaplain, Rev. Cornelius M. Buckley, S.J., who was turning 91 years old. The student-led group Chrysostomos, directed by Theresa Donnelly (’16), then performed several celebratory hymns. And Resident Assistant Sarah Dufresne (’14) presented the Cardinal with a spiritual bouquet — including promises of more than 100 Masses, 50 Rosaries, and 80 other devotions — on behalf of the entire College community.

To conclude the evening, Chairman of the Board of Governors R. Scott Turicchi presented His Eminence with the College’s highest honor, the Saint Thomas Aquinas Medallion. Named for the College’s patron, the Medallion pays tribute to those who have demonstrated extraordinary dedication to Christ and His church, as well as leadership in advancing the teachings of the magisterium.

“His Eminence Gerhard Cardinal Müller has shown an exemplary loyalty and devotion to the Holy Father and the magisterium of the Church by his steadfast orthodoxy throughout his nearly 40 years as a priest, bishop, and now cardinal of the Catholic Church,” said Mr. Turicchi, quoting a unanimous resolution of the Board. “He has worked tirelessly to proclaim, support, and defend the teachings of the Church, and to advance the mission of Christ on earth through his leadership of the Congregation for the Doctrine of the Faith.”

Abbot Hayes then offered the night’s benediction. “O Mighty and Living Father, we thank you for the communion which we celebrate today, our communion with the saints,” he began. “Assured of their unfailing help, we praise them as we strive each day to walk in their footsteps, and thereby walk in the footsteps of Your son. Bless in particular Cardinal Müller, strengthen and guide and inspire him and his collaborators in their responsibilities.”