Cardinal O’Brien: “You Have Been Formed for a Mission”

Note: Due to technical difficulties, the very beginning of Cardinal O’Brien’s address is missing from the audio file below. Please pardon the inconvenience.

His Eminence Edwin Cardinal O’Brien
Grand Master, Equestrian Order of the Holy Sepulchre of Jerusalem
Commencement Address to the Class of 2014
May 17, 2014 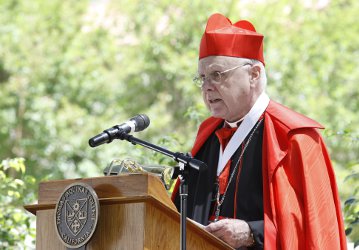 An old Irish joke has it that a commencement speaker is like the deceased at an Irish wake: You have to have him so that the party can begin!

Thank you for inviting me to share this special day with you on this beautiful campus, which so magnificently evokes both faith and reason, and which reminds us that beauty is a unique path to God in our confused and sometimes ugly age.

Dear friends of the Class of 2014 of Thomas Aquinas College:

Your commencement day falls between the canonization of Pope St. John Paul II, which was celebrated on April 27, and the Ecumenical pilgrimage of Pope Francis to Jerusalem, Greece, and Rome, which will begin in just one week — the Greek Patriarch, the Pope of Rome on a pilgrimage to Jerusalem. That seems an entirely appropriate and happy coincidence for a school like this. For Thomas Aquinas College, which seeks to train young minds in the classics of Western civilization and does so in an authentically Catholic spirit, is a school which appreciates that Jerusalem, Athens, and Rome are the three pillars of Western civilization — the civilizational heritage of which you, the class of 2014 are the heirs and trustees.

Permit me a few brief thoughts on Jerusalem, Athens, and Rome, their place in the civilizational project that we call the “West,” and the challenges which that project faces today.

Jerusalem: From biblical religion, the West learned the crucial lesson that our lives are not cyclical repetition or chaotic happenstance. Rather, the Bible taught the West that our lives are in via, “on the way,” a journey, a pilgrimage, with an origin, a design, and a destination. The origin is God, creator of heaven and earth, and the destination is the Kingdom of God, in the wedding feast of the Lamb, of which St. John wrote in the 21st chapter of the Book of Revelation.

And perhaps, in your families and professional lives, you can do something to remind the world that biblical religion liberates human beings in the deepest meaning of human liberation.

Athens: From classical Greek philosophy, which lives here in Santa Paula as it lives in few other American institutions of higher learning, Western civilization learned that there are truths embedded in the world and in us, and that men and women can arrive at those truths through the exercise of reason. That confidence is at the root of our convictions about the natural moral law, as it is at the root of Western science.

You have learned here, I’m sure, that reasoning is hard work. But I expect you’ve also learned that the exercise of reason can be exhilarating. Love lifts us out of ourselves; so does learning. As heirs and trustees of the tradition of Athens, my hope for you is that you will all be lifetime learners, who never tire of stretching your minds, as I pray you will never tire of opening your hearts.

And in a culture that is increasingly confused about the truth of things, be, like John Paul II, witnesses to the truth: the truth that there is more than “your truth” and “my truth,” the truth that there is something properly called “the truth,” and we have access to it by our reason. There are other avenues to truth, of course: but it will be the task of your generation, tutored by the Pope and saint who wrote the encyclical Fides et Ratio, to remind the West that reason is part of our civilizational heritage, and that the Catholic Church is the great institutional safe-deposit box of reason in the 21st century West.

Rome: From Rome, and from great figures like Cicero, who through your studies have become your traveling companions on the pilgrimage of life, Western civilization learned that the rule of law is superior to the rule of brute force in the exercise of arbitrary power. That lesson has to be learned in every generation. But in learning it, we recapitulate the lessons learned, not without cost, in the Roman forum and in the building of a law-governed polity that once ruled the entire Mediterranean world.

As that Roman lesson about the superiority of the rule of law worked itself out in the Christian Middle Ages, other ideas were added to the mix: that there is an inherent sense of justice in the people to which just government must attend; that consent is essential to just governance; that positive law must be tethered to the natural moral law if law is not to decompose into an instrument of tyranny. Pope St. John Paul II reminded the West of these truths in his social magisterium; and it must be your care and concern to be witnesses to these truths in your lives as citizens.

Jerusalem, Athens, and Rome: three pillars of the West; three mutually dependent pillars of the West. All must be sturdy, each must reinforce the others, if the Western project is to continue, and continue in ways that support genuine human flourishing. Let me take a brief moment to explore this along the via negativa: by way of the bad example of recent history.

As the great French theologian and friend of John Paul II, Henri de Lubac, taught us in his book The Drama of Atheistic Humanism, 19th century European high culture misunderstood the God of the Bible as the enemy of human maturation and freedom. So the God of the Bible had to go, in the name of liberation. The rapid and often virulent secularization of European culture followed.

But then what happened? It turns out that, if you throw the God of the Bible over the side — if you throw Jerusalem over the side — the Athenian pillar of Western civilization begins to crumble. Reason, left to its own devices, is diminished, and then begins to question its own capacities. Or, to put it another way, if you no longer believe that the God of the Bible imprinted the divine reason on creation, in his very act of creation, then, sooner or later, you will cease to believe that creation is “reasonable:” that there are truths built into the world and into us that we can get to by reason. And that is precisely where we find ourselves today: in a post-modern world that can no longer affirm “the truth,” only “your truth” and “my truth.”

But as John Paul II pointed out, that collapse of faith in the truth is socially and politically unstable. For if there is only your truth and my truth, and neither of us recognizes anything as the truth, then how do we settle the argument when your truth and my truth come into conflict? Against what horizon of judgment do we resolve our dispute? There isn’t any. So either you impose your truth on me, or I impose my truth on you.

And that brings us, in short order, to what Pope Benedict XVI called the “dictatorship of relativism.” In a society where Jerusalem and Athens have crumbled, Rome, too, must crumble. When the God of the Bible has been jettisoned and, as a consequence, faith in reason has disappeared, the rule of law will inevitably disappear as well, sooner or later.

In being formed by the unique education offered here at Thomas Aquinas College, you have been formed for a mission: and that mission is nothing less than the rescue of the civilizational project of the West. Some of you will do this in the beautiful microcosm of the family. Others of you will do this through a vocation to the priesthood or the consecrated religious life. All of you will do this, I pray, as citizens. It is a challenge that you have been uniquely equipped to meet, a task for which you are singularly well-formed. The challenge and the task are daunting, to be sure. But the challenge and the task are also exhilarating.

Pope St. John Paul II, at your age, lived under a draconian Nazi occupation that seemed to mark the end of civilization: the end of faith, the end of reason, the end of law, the end of mercy and compassion and love. Take heart from his example. By holding fast to Jerusalem, Athens, and Rome, by holding fast to his conviction that Christ has conquered death and that God’s purposes will be vindicated, the young man who became John Paul II survived the Nazi tyranny and defeated the Communist tyranny.

That example can inspire you to be witnesses to truth, witnesses who will help give the West a new birth of freedom: freedom tethered to truth and ordered to goodness; freedom lived beautifully, as you have been taught to live here in this beautiful and noble place.

Godspeed on your journey.