The Institute of Classical Architecture & Art, which is dedicated to “advancing the classical tradition in architecture, urbanism, and their allied arts,” has presented its prestigious Arthur Ross Award for Excellence in the Classical Tradition to Duncan G. Stroik, the design architect of Our Lady of the Most Holy Trinity Chapel.

Established in 1982, the Arthur Ross Award is the longest-running prize given to classical architects in the United States. Its purpose is to “recognize and celebrate excellence in the classical tradition.” In presenting Mr. Stroik with an award “for lifetime achievement in architecture,” Mark Ferguson, director of the Institute’s board of directors, observed: “Duncan’s practice grew from a few unbuilt, published  projects to commitments from patrons building for the ages and willing to commit to high-quality materials and workmanship in buildings dedicated to worship.” 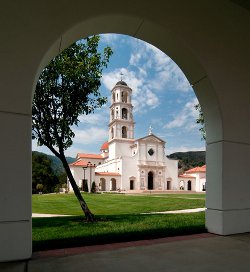 Among those patrons are Thomas Aquinas College and its late president Thomas E. Dillon, with whom, Mr. Stroik once wrote, he worked “in the spirit of coauthors” in the design of Our Lady of the Most Holy Trinity Chapel. Mr. Stroik has received numerous awards and recognitions for his work on the Chapel, including, in 2011, a Palladio Award for “outstanding achievement in traditional design.”

A professor of Architecture at the University of Notre Dame and principal of Duncan G. Stroik Architect, LLC, Mr. Stroik has designed numerous other houses of worship, including the Shrine of Our Lady of Guadalupe in La Crosse, Wisconsin; St. Paul the Apostle Catholic Church in Spartanburg, South Carolina; and St. Margaret Mary Catholic Church in Bullhead City, Arizona. His involvement in the new renaissance of sacred architecture has led to the formation of the Society for Catholic Liturgy and the Sacred Architecture Journal, of which he is editor.

In receiving his Arthur Ross Award, Mr. Stroik said that he seeks to create buildings that last hundreds of years, so as to “express the eternity we believe in.” Such projects, however, take “great time and money,” and for that he thanked the “great patrons, who have supported me and challenged me to build for eternal, a timeless architecture.”

Below is video from the awards ceremony, which took place at New York’s University Club on May 2.