On Saturday members of the Ventura Chapter of the Catholic Association of Latino Leaders (CALL) gathered at Thomas Aquinas College to contemplate the words of Pope St. John Paul II on an issue of great import — the role of the family in the world today.

The event began with Mass in Our Lady of the Most Holy Trinity Chapel, offered by College Chaplain Rev. Cornelius M. Buckley, S.J. Attendees then met for a 90-minute seminar in St. Bernardine of Siena Library. Two members of the College’s faculty who are also alumni, Dr. Marco Emerson Hernandez (’97) and Mr. Tom Susanka (’76), led the discussion, which centered on the first 50 pages of John Paul II’s apostolic exhortation Familiaris Consortio, The Role of the Christian Family in the Modern World. 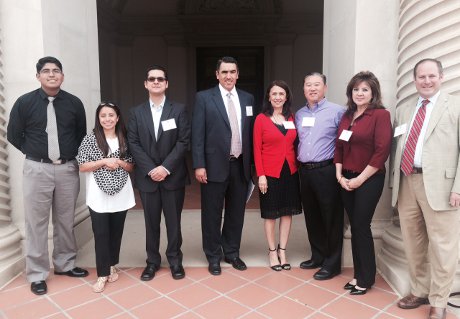 “Our discussion was lively, and everyone had a hand in it,” says Mr. Susanka. “The wisdom and timeliness of St. John Paul’s teaching on marriage were well understood and well received. This was just about a model seminar!”

Justin Alvarez (’97), a graduate and regent of the College, an attorney, and head of CALL’s Ventura Chapter, adds that the conversation was particularly timely. “As we Catholics in the United States prepare to participate in Pope Francis’s World Meeting of Families this fall, it is critical to our members to ever more form themselves, and the communities they lead, by careful study of the Church’s teachings on the family,” he says. “As with so many things in life, the more you know about the family, the better the family can function. As goes the family, so goes the world.”

Attendees continued the conversation over a buffet lunch in St. Joseph Commons. “Our CALL members were grateful to the team at Thomas Aquinas College for inviting us and making this great event possible,” says Mr. Alvarez. “We are privileged to experience the learning process for which Thomas Aquinas College is famous.”