College Serves as Filming Location for Video Series about Our Lady

In the final days of Christmas vacation, just before students began to return to campus, Thomas Aquinas College served as the filming location for a forthcoming video series, The Bible and the Virgin Mary. A production of Dr. Scott Hahn’s St. Paul Center for Biblical Theology, this 12-part catechesis will include discussions of the Scriptural roots of the Church’s teachings about Our Lady, an examination of the 10 Vatican-approved Marian apparitions, and stunning videography — shot almost entirely in and around Our Lady of the Most Holy Trinity Chapel.

“Aesthetically, the Chapel was the most perfect place for our discussions of the Virgin Mary,” says Linda Kane Hitchcock, art director for the project and chief creative officer of Skyrocket Pictures. “The cleanness of the environment allows the viewer to focus on what is being said, while still understanding that we’re in this beautiful, majestic space.” 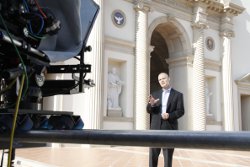 Matthew Leonard speaks in front of Our Lady of the Most Holy Trinity Chapel.The Bible and the Virgin Mary is one of six parts of the St. Paul Center’s acclaimed Journey through Scripture study series, and it is based on Dr. Hahn’s 2006 book, Hail, Holy Queen: The Mother of God in the Word of God. Collaborating on the project are Ms. Kane Hitchcock’s Skyrocket Pictures and Falling Upwards Productions, whose president, Lannette Turicchi, is the wife of R. Scott Turicchi, chairman of the Thomas Aquinas College Board of Governors. The St. Paul Center’s executive director, Matthew Leonard, is the presenter for the series, delivering nearly six hours of Biblical catechesis.

“The Journey Through Scripture series is designed to help ordinary Catholics who want to gain greater insight into God’s word and deepen other aspects of their faith,” says Mr. Leonard. “This part takes all of the references to Mary that we find in Sacred Scripture, of which there are only 15, and unpacks them. Although some of the Marian doctrines and dogma are not explicit in Sacred Scripture, she is still woven into the fabric of the text, and we can pull that out and find where the teachings of the Church come from.” 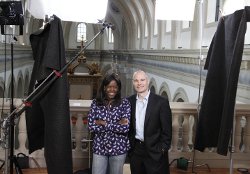 Lannette Turicchi and Mr. LeonardThroughout the last week of Christmas vacation, the College’s chaplains removed the Blessed Sacrament from Our Lady of the Most Holy Trinity Chapel each morning after the early Mass. The film crew then entered the building and set up its equipment for shooting, which continued throughout the day, ending in time for the evening Mass at 5:00. It filmed scenes all over the Chapel — in the plaza, at the transept shrines, from the choir loft, and in the sacristy — as well as elsewhere on campus.

“We shot images of the Virgin all around. We went down do the grotto. We shot the steeple. We also shot some of the paintings,” says Ms. Kane Hitchcock. “We wanted a broad appeal for the series and had a specific design aesthetic in mind to reach that goal. This location captured that vision perfectly.” Adds Mr. Leonard, “The Chapel has a very beautiful, personal look that fits the ambience we are trying to create. And, of course, it is named after Our Lady, so it just makes perfect sense to film here.”

The Bible and the Virgin Mary will be the first of the Journey through Scripture series to be published in video format. Recognizing the value of the catechesis for furthering the New Evangelization, His Eminence Donald Cardinal Wuerl, Archbishop of Washington (D.C.), has championed the project since its earliest stages. “Cardinal Wuerl was instrumental in the founding of the St. Paul Center, and he was very encouraging when we decided to turn Journey through Scripture into a video series,” says Mrs. Turicchi, the project’s executive producer. His Eminence even lends his image and voice to the production as the reader for its numerous Scripture passages.

Also contributing to the project is a recent graduate of the College, Daniel Bagdazian (’13). “Daniel has been a fantastic production assistant,” says Mrs. Turicchi. “He knows the campus, knows the area, and has been a great help.” For his part, Mr. Bagdazian found that getting a better understanding of the film and entertainment industry will aid him in his pursuits as a professional musician. “I have learned a lot and met a lot of good people. It has been a great experience,” he says. 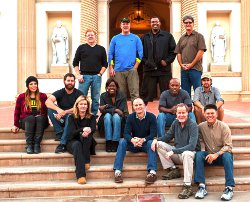 The crew“We are so grateful that President McLean and the Board allowed us to shoot at the College because it was the perfect venue for this production,” says Mrs. Turicchi. “We also want to thank the chaplains, especially Fr. Hildebrand and Fr. Buckley, who were very helpful, and who each played a small on-camera role in our production.” Fr. Buckley’s hands, clutching Rosary beads, are set to appear in one shot of The Bible and the Virgin Mary, and an image of Fr. Hildebrand in the confessional has been saved for a future installment of the Journey through Scripture video series.

The Bible and the Virgin Mary is due to be released sometime during Lent, both in DVD and in streaming video, via Lighthouse Catholic Media. Although intended primarily for parish programs, the videos and accompanying study guides will also be available for individual purchase.

“The point of this project is to help Catholics understand where the teachings about Our Lady come from, and also to answer the questions of others who may have an interest in what the Catholic Church teaches about our mother,” says Mr. Leonard. “It’s about helping us to fall in love with our mother and to see the role she plays in getting us to Heaven.”