Thomas Aquinas College has received a grant of $3.2 million from the Fritz B. Burns Foundation of Los Angeles for the construction of a new classroom building on its campus located in the foothills of the Topatopa mountains in Ventura County. The new building — the thirteenth constructed since the College acquired the undeveloped site in the 1970s — will nearly complete the academic quadrangle, which is anchored by Our Lady of the Most Holy Trinity Chapel.

Commenting on the grant, Burns Foundation president Rex Rawlinson said: “When I first met Thomas Aquinas College’s late President, Tom Dillon, he gave me a copy of The Last Days of Socrates. Our discussions led to extensive study on my part, until I was assigning myself homework, such as reading Saint Augustine’s Confessions to compare and contrast with Rousseau’s Confessions. I realized then the value of what Thomas Jefferson had and I had missed — a classical education. Thomas Aquinas fills a void lamentably abandoned by most colleges."

“We are profoundly grateful to the trustees of the Fritz B. Burns Foundation for this most generous grant,” says Thomas Aquinas College President Michael F. McLean. “When we first opened our doors, the late Mr. Burns contributed to our founders’ fund, and he supported our efforts for the rest of his life. In the years since, the Burns Foundation has been an extraordinary partner in our endeavor to firmly establish Thomas Aquinas College, contributing to the construction of several buildings on the campus as well as to our financial aid fund. This latest grant continues the legacy of giving that Mr. Burns began and testifies to the depth of the Foundation’s commitment to Catholic liberal education.” 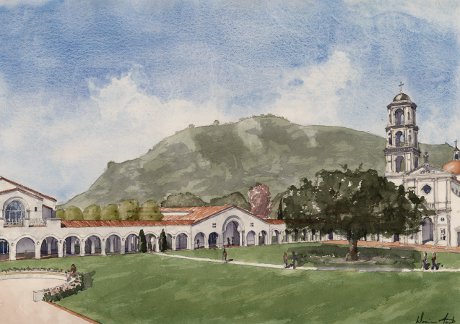 Housing eight classrooms, the new building is designed to facilitate the small, seminar discussions about great books that are at the heart of the College’s unique program. Its design architect is Scott Boydstun of Rasmussen and Associates in Ventura, Calif., which has designed 11 of the 12 permanent buildings on campus.

The classroom building will be named for St. Gladys, the patron saint of Fritz Burns’ beloved wife. The fifth century daughter of a Welsh king, St. Gladys was married to King Gundleus, a convert to Christianity and himself a saint. Together, they raised at least five children who are saints, and one of whom — St. Cadoc the Wise —founded a monastery and college in Wales. In later life, the saintly couple had a vision directing them to leave political life and establish a hermitage; there they lived out the remainder of their lives in celibacy and prayer.

Commenting on the name of the new building, Dr. McLean said, “St. Gladys is a wonderful example for our students, so many of whom go on to marry and raise families themselves. Particularly edifying in the life of St. Gladys is the saintliness of her children and the way in which she integrated an active, political life with the contemplative life.”