Alchemy, Teenagers, and the Christian Artist

Samantha (McCall ’06) Cohoe is the author of the recently released young-adult novel A Golden Fury (Wednesday Books) — a historical fantasy which chronicles the perilous adventure of a teenage protagonist who risks her life and her sanity in pursuit of alchemy’s greatest prize: the Philosopher’s Stone. Mrs. Cohoe lives with her husband, Caleb (’06), a philosophy professor at Metropolitan State University of Denver, and their three children in Colorado.

What is the one-sentence pitch for A Golden Fury?

On the eve of the French Revolution, a teenage alchemist is on the verge of a great discovery — and she finds that the cost may be her mind.

Why did you choose that particular setting and time?

I liked putting it at the beginning of the French Revolution because it’s both a hopeful and ominous time. So much changed and was about to happen, and the goals are so big but also so dangerous. It sort of mirrored alchemy in that way — something with these huge goals and aspirations, but also these really terrifying possibilities.

What led you to choose alchemy for your subject matter?

Alchemy interacts a whole lot with history, theology, and science, and the goal of alchemists always seemed like it was worthy of having a fantasy story written about it. It just takes such boldness to believe that, if you get everything right, you can actually create eternal life and turn lead into gold. Somehow I came upon the idea of alchemy taking place in an academic setting, which ended up kind of being a side part of the book, but basically it would be something like “Alchemy at Oxford.”

That is an unusual twist, isn’t it? You have given alchemy a more respectable face than it usually gets.

Right. The alchemists in my book think of themselves as scientists, not occultists.

Given the supernatural associations around alchemy, should parents be concerned about letting their children read A Golden Fury? Are kids likely to come away from it with a heightened curiosity about dark magic?

A Golden Fury is, at its heart, a story about the dangers of ambition and the price of power. My characters believe that alchemy is a science and pursue it as such, but yes, they do run into some supernatural stuff. Without spoiling too much of the plot, I would reassure parents that any child who comes away from the book with a heightened curiosity about dark magic would have had to misread the book very badly. I would also add that any book can depict evil without endorsing it, as readers of great books know.

What is your book’s genre, and what age is the target audience?

The genre is historical fantasy, which is a pretty small category. I think the book is honestly more historical than fantasy in its feel, but you can’t have a magical science without there being some fantasy.

The publishing age category is “young adult,” which means 13–18-year-olds, but we are aware that, these days, a huge portion of our readers are actually adults. Still, I think it’s important to always keep the teen reader foremost in our mind, even if, in reality, a lot of our sales come from women like me.

How do you do that? Do you try to get back into your 16-year-old mind and envision how this book would affect you?

That’s a big part of it. Until this year I taught Latin at a classical high school, and that was helpful for keeping in touch with students, but mostly what I do is access that part of myself. So far it hasn’t been difficult. For me, the teenage years were so vivid and so interesting and full of change, and those years seemed longer than the years now, because so much happens and your psyche is just a tumultuous place to live.

Sometimes I find, when I’m reading young adult novels, that the heroine has the confidence and the maturity of a 30-year-old woman. When you are used to reading that kind of teenage protagonist, you kind of forget what teenagers are really like, and then you get really annoyed when you get teenage characters who actually act like teenagers — because teenagers can be annoying! I mean, I love them, but they do make a lot of bad decisions, and those decisions really annoy readers sometimes.

You can see that in your protagonist, Theosebeia: On the one hand, she is obviously learned and sharp, but she is also lacking in wisdom and practical experience. She can be headstrong and over-confident.

That’s exactly what I was like as a teenager. I was really smart, or at least I thought I was. There was this deep strain of over-confidence running alongside insecurity. Ask anybody who had me in seminar at TAC!

I think over-confidence often comes with insecurity, where you are projecting too much confidence in order to cover your own sense of doubt. Especially at the College, there is a temptation to over-confidence because you are learning so much. You look back and think, “Wow, look how much more I know now than I did before I got here.” Or you compare yourself to the people you know from high school who went to other colleges. But, of course, the curriculum isn’t meant to do that. The founders and the tutors were always reminding us, “This is only the beginning. Make sure that you’re just starting out on your journey — this is not where you stop when you leave.”

Would you say you grew — emotionally, spiritually, intellectually — at the College?

Definitely. It was absolutely the best place I could have gone. There were a lot of places I could have gone where I would have gotten lost. But TAC is a really good place to realize that the world, although small, can be bigger through ideas and through connecting with the history of ideas.

Did you want to become a writer when you were a student, or did that come later?

It’s a little bit of a twisty path. I left TAC and went to graduate school for philosophy at Yale, and then discovered I did not enjoy graduate school. It’s not nearly enough talking! What’s great about TAC is the seminar, and I had hoped that grad school would be like that, but it really was a lot of being alone by yourself in the library.

My husband was at Princeton (well, he wasn’t my husband yet), and we decided I was going to quit grad school and we would get married. We had babies right away. I started writing my first book just for fun when my first son was born, and it took me about seven years to finish it, because babies are very distracting! My first book took seven years to write, and it took another five years until I was published. So it’s a long road. 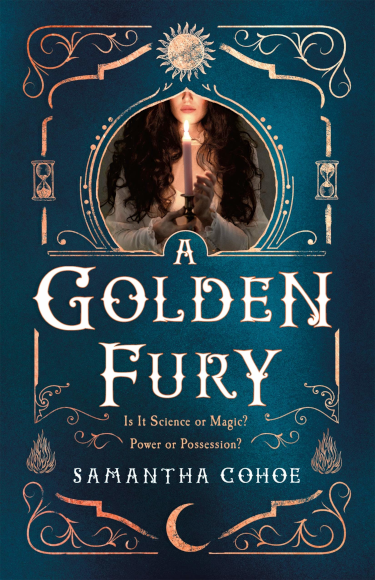 You definitely see hints of your liberal education pop up throughout A Golden Fury. You have multiple references, for instance, to Rousseau and to Latin. Are there other ways you think your education may have helped to inform your writing?

To write historical fantasy you have to do a lot of research. The ability to engage with primary texts and get into the mind of a thinker from a different time, with a different worldview, is important if you want to write in a way that doesn’t end up being anachronistic, as historical fiction is prone to do. Reading primary sources and really getting into the minds of those writers in that time and seeing the coherence of their worldviews — rather than just judging them from a modern perspective — helps me to write better historical fiction.

That’s a direct parallel — she’s talking about valuing alchemy for its own sake rather than the utility of it, which is how Thomas Aquinas College thinks about education. So, yes, I absolutely had that in mind when I wrote that line.

A Golden Fury is written for a broad audience, and it never claims to be a Christian book, but there are some Christian themes in here — human dignity, natural law, the meaning of parenthood, and even small hints about chastity. How would you explain that?

I am not writing Christian books; I am not writing for a Christian ghetto. I’m certainly not marketing these books as Christian, because they are not. There is nothing evangelical about them. But they are products of my mind and my heart, and if you weren’t able to catch glimpses of how I have been formed as a Christian, then I would be pretty worried about my formation, because that has to come out. A book is an expression of its creator.

The story itself is largely secular, but you do have one character who is a practicing Catholic.

I do, and he is the best one! Dominic is the only unambiguously good character in the whole book, and I do have a moment where he is in confession, and Thea is thinking about what that means, to be able to confess, and how much she does not have that in her life. If you don’t have anyone to ask forgiveness from, then there isn’t any humility in your worldview — and there isn’t for Thea. She and her mother don’t have any limits on their aspirations. They don’t acknowledge any priests but themselves, and so they don’t really have any way to ask for forgiveness.

Tell us a little bit about your next book.

It’s called Bright Ruined Things, and it’s another historical fantasy stand-alone. Let me see if I can give you the pitch: It’s a retelling of The Tempest, but more like The Tempest meets The Great Gatsby — set in a glittering 1920s world. It’s about the powerful Prosper family, which controls a magical island, and its teenage ward, Mae, who tries to seize the magic that has always been denied her. It’s coming out in the fall of 2021.