An Interview with the Most Rev. Samuel J. Aquila

“Do Whatever the Lord Tells You,
and be Faithful to Jesus”

Note: The Most Rev. Samuel J. Aquila is the Archbishop of Denver. He served as the College’s Convocation Speaker last fall, at which time he granted the following interview.

How did you discern your vocation to the priesthood as a young man at a secular college in the turbulent 1960s?

During my college years I really searched for a faith, and there was always some underlying belief, but I went through a period where I was at best agnostic and not really sure of the existence of God. Then I began to study Eastern religions, and as I studied those I slowly worked my way back to a firm belief in Christianity. I then was involved with the Wesley Foundation, which was a campus group, and I remember vividly one time we were having a communion service. I asked the others what they believed about the Eucharist, and they said, “Oh, you know, it’s just something spiritual.” And I thought, “The Catholic Church has the real thing!”

I wanted the real thing, and so that brought me back into the Church. I went to confession and then began to think very, very, seriously about the priesthood. Once I finished college I went into the seminary, and after six months it was clear that God’s plan was that I be a priest, little knowing what He had in store for me. But it was really just about opening my heart, surrendering to the Lord, and giving myself as a gift to Him.

What is the role of Catholic colleges in fostering vocations?

When I look at this college I am really envious of the education the students are receiving, the fact that they are reading great books. It is an incredible gift to be able to learn that way. A college like this can really help foster vocations because students are constantly entering into dialogue and reading the great works. I just walked through your bookstore and saw some of the books that the students are reading. Those books are going to make them think, and they are also going to give them the desire to do the will of God. In that way a college like this can have a huge role in really preparing young people, whatever their vocation. Your graduates will have a great foundation for whatever they do and wherever the Lord is calling them.

As I shared with the students today in my homily, I am firmly convinced that God has a plan for each and every human being that only that human being can ever fulfill. It is when we open ourselves to that plan that we can find true joy, peace, and happiness.

When you were giving that homily, you may have noticed that in the back of the Chapel, just above the two bronze doors and below the statue of Our Lady, is your —

“Do whatever he tells you.” Why did you choose those words of the Blessed Mother for your motto?

I have always had a special devotion to Mary and to Our Lady of Guadalupe. Her deepest desire is that we come to know her son, and she will lead us to Him when we entrust ourselves to her. I found out that I was named a bishop on the Feast of the Visitation of Mary, May 31, and so that night I was praying about what I should do. Should I say “yes?” Should I say “no?” And Elizabeth’s words kept coming to me: “Who am I that the mother of my Lord should come to visit me?” Deep down in my heart I knew I had to say “yes,” but there was also that sense of, “Do whatever He tells you.” Those are Mary’s last words ever spoken in the Gospels. They are her message for every disciple, to do whatever the Lord tells you and be faithful to Jesus. 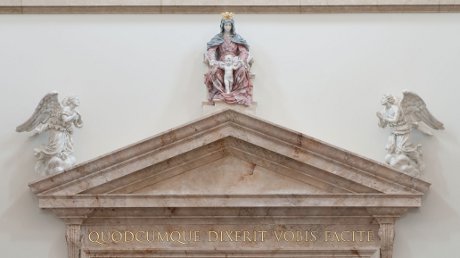 Statue of Our Lady, Seat of Wisdom in Our Lady of the Most Holy Trinity Chapel

In your homily you said, “Our education is not about ourselves.” Could you please elaborate on that?

We live in a society — and I find this even with some of our seminarians and some of the young people today — where there is such a focus on ourselves. Certainly narcissism has been around for a long time, but there is more of an inclination toward it today. And young people may often look only at themselves and what is happening around them: It is about me rather than the Gospel message of really loving your neighbor.

So when I say that our education is not about ourselves, the point is that we should not approach education with the perspective of, “What’s in this for me?” Education should be seen as a gift that is given to us in terms of having the time set aside for learning and for seeking what God’s desire is for us. It is about helping young people to encounter Christ, especially in a program like the one at Thomas Aquinas College and through the great books that your students read. Whether it is through St. Augustine’s Confessions, or Aquinas, or through the great works of literature, they come to discover the importance of loving their neighbor as themselves. It is not about me, but it is about community and living in the community of the Trinity — the Father, the Son, and the Holy Spirit. The focus is not on ourselves, it is on the Lord and others.

To what do you attribute the rise in narcissism in the culture?

When you abandon God, the only thing left is yourself, and when you remove God from the equation, what is the reason for any altruism, any sense of the other? How do I really care for people if I do not believe in a God? The whole approach of a secular culture and liberal culture is to focus on my own pleasure and what’s in it for me. So we see young people very easily moving in and out of relationships, without much thought or meaning, and then they cannot understand why they are so unhappy.

When you move away from God, there is no moral compass, and so the world is going to be very confusing and dark. It is going to be a world without hope. As Christians we believe that every human is made to live for eternity, and that is where we will find our true happiness. But in a culture that does not have that, people will look for happiness elsewhere, whether it is in drugs and alcohol, or in sexual intimacy, or money, or materialism, but none of that brings true happiness.

How does this narcissism, or faithlessness, play itself out in the life of the family?

By losing that sense of the other; there has been a removal, or stepping back, from commitment to family and instead an emphasis on materialistic or career success — basing one’s meaning, dignity, worth, and value on career, materialism, and success, and not on the gift of motherhood and fatherhood. The most joy-filled people I have ever seen are mothers as they gaze upon their newborn children. The happiness in mothers, the joy in mothers — it is an incredible gift, and certainly our culture today does not see it as much. The beautiful nature of woman is that she is the one who bears children, but the gift of children is seen more as a burden today than it is a gift.

Contraception is a real denial of that gift of motherhood and of the dignity of motherhood. In Humanae Vitae, Paul VI offered dire warnings about the use of birth control and its demeaning of women and their true womanhood. Contraception takes away from the mutual responsibility of man and woman; it undermines the recognition that the marital act not only communicates the love between husband and wife, but is also for procreation. That is why we have the discussion around civil unions and same-sex acts and everything else, because we do not look at what is the truth, the dignity, and the meaning of human sexual intimacy. Once you remove procreation from the equation, you can justify anything.

My hope is in the many faithful, young Catholic families I see. I have seen the joy in those couples, the real desire to give themselves to each other. They are not entering into marriage with rose-colored glasses; they know the ups and downs that they will experience in a lifelong commitment. They are deeply convinced of the truth of the teachings of the Church and of the three goods of marriage.

The College’s new classroom building, St. Gladys Hall, is named for a wife and a mother. Can St. Gladys be a model of marriage and family life for young people today?

Honestly, I had never heard of St. Gladys before coming here. And yet she is really a saint for our age, and I think it is fantastic that you named this building after her. Both she and her husband are saints, and they have eight children, six of whom are saints. The fact that she was involved in the material world, yet lived the call to holiness in the vocation of marriage, seeking the sanctity of her husband and her children — and her husband seeking the sanctity of his wife and his children — shows what is possible for the family. You really want to hold her up for young people, for men and women to see what is possible for the family and what every family is called to.

You have written that “reason alone” will not win over the culture, but that “something more is needed.” What is that something more?

It is faith. It goes back to Fides et Ratio, the great encyclical of John Paul II, which said that there are two wings that are needed for the fullness of the human person. Even as we meditate and grow in understanding of the mysteries of faith and the reasonableness of them, we always reach a point where we have to have faith and trust; we have to put our faith in something. It is either going to be in the God who is love, or it is going to be in humanity.

The Second Vatican Council is clear that the role of every Catholic, and particularly lay Catholics, is to be a leaven in the world. But too many Catholics have accepted a false understanding of church and state, and they no longer seek the good but compromise with evil every day. They support evil while hiding behind the lie of being “pro-choice” or the lie that “these people do not have dignity because they are here illegally.” So it is important in the program here at the College that you really help the young people not only to see the close relationship between faith and the gift of reason, but also what it means to bring that faith into society and into the culture for its transformation.