After hearing the prayers of his loved ones, William C. Grimm — the father of 14 Thomas Aquinas College alumni and the grandfather of 51 more — passed away on the evening of June 15, his 88th birthday. The College prays for the repose of his soul and the consolation of the Grimm family, which has played a vital role in the history and culture of Thomas Aquinas College.

“A couple of hours before Dad died, there was a German chocolate cake, a banner, a birthday song, and sweet music at the party in his room, followed with the Rosary, the Chaplet, and prayers for the dying,” says his daughter Michele Loughman (’81). As another daughter, Angela Lessard (’85), put it, “It seemed appropriate. There was a lot of joy in that room despite the fact that he was leaving us.”

A longtime resident of Pasadena and a faithful Catholic, Mr. Grimm first learned about the College in 1971, just months before the start of its first academic year. According to his son Dan (’76), Mr. Grimm was so enthused about the prospect of a local, authentically Catholic college that he drove four of his 17 children from the family home in Pasadena to the College’s original campus in Calabasas. What followed was an impromptu interview that quickly turned into an audition.

“Dad thought we would have a better chance of getting in if we sang,” explains Dan. The Grimms, gifted musicians all, had been singing sacred music together for years. “So we lined up in the foyer of the building and we started singing.”

At the College’s 30th Anniversary Dinner in 2001, Founding President Ronald P. McArthur admitted that, at first, this spontaneous performance concerned him. “When we were about to open our doors in 1971, a Mr. Bill Grimm pulled up with a number of his older children,” he said. “As we talked with him, he mentioned that these young people had a choir, and I remember thinking to myself, ‘This is all we need: some crazy choir singing rock music!’”

He need not have worried. With the College’s founders — “who were all there in shirtsleeves,” Dan recalls — looking on, the Grimm Family singers opened with Palestrina, immediately allaying Dr. McArthur’s concerns. The founders were delighted by what they heard.

When the College first opened months later with two Grimms in its freshman class, “we were the choir,” says Dan. Said Dr. McArthur: “At the first Christmas party, what was the entertainment? Bach, Handel, Gregorian Chant…. It set the tone for the whole college in entertainment; there was a level of intensity and a level of taste in great music and liturgical music right from the beginning. Now, who would have thought, with only 32 students, there would be such an accomplished group, such a talented group, right at the beginning of the school? Yet there was, and that has stayed with the school to this day.”

Indeed, it still remains. Dan Grimm is the director of the Thomas Aquinas College choir, and over the last 44 years, countless of Bill Grimm’s descendants have blessed the College with their voices and their talent.

The Grimm family has been supportive of the College in numerous other ways as well. In the early years Mr. Grimm expended considerable time and effort helping the College to procure equipment for its natural science laboratories. He and his wife, Irene, were also famous for welcoming students at a party in their home each fall when the College was still at the Calabasas campus.

“It is hard to imagine what Thomas Aquinas College would be today without Bill Grimm, his children, and his many grandchildren, who — as students, alumni, parents, benefactors and, of course, singers — have given so much not just to the College but to the community that it has engendered,” says President Michael F. McLean. “We thank God for that day Bill first visited our campus and for the many blessed days that have followed. We pray for the repose of his soul and the consolation of Irene and the entire Grimm family.”

In lieu of flowers, the Grimm family requests donations to the Financial Aid Fund at Thomas Aquinas College. 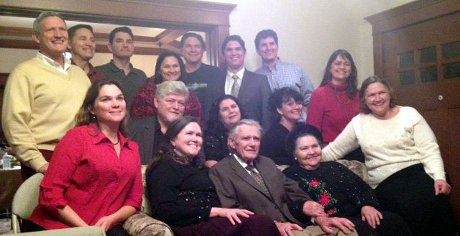