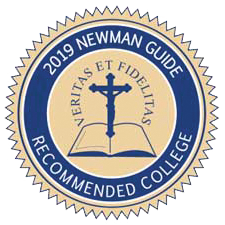 In the newly released edition of The Newman Guide to Choosing a Catholic College, the Cardinal Newman Society once again recommends Thomas Aquinas College as one of 15 residential Catholic colleges nationwide with a strong Catholic identity. The 2019-20 publication lauds the College for “an impressive intellectual rigor that is matched by a commitment to orthodox Catholicism.”

Noting that there “is a certain sense of ongoing immersion in a special adventure at TAC that can last a lifetime — and beyond,” the guide adds that the College’s “environment is stimulating but not intimidating … intellectual, yet relaxed and personal as well.” Thomas Aquinas College’s graduates, it concludes, “have much to offer the Church and future employers who value critical thinking, analytical reasoning, strong communications skills, and an ethical sense.”

What distinguishes the Newman Guide from its secular counterparts is that it features only schools that are “committed to uniting faith and reason and strive to be faithfully Catholic.” To that end, it reassesses each institution annually — even dropping two from this year’s recommended list. The Newman Society has recommended Thomas Aquinas College every year since it first released its guide in 2007. The College,  it observes, offers students a “vibrant spiritual program” that includes holy hours, regular confession, and multiple Masses daily.

This year marks the first time that the College has two campuses for the Newman Guide to include in its review. “In the fall of 2019, [the College] will open a second campus in Western Massachusetts in the town of Northfield,” the authors report. “On both campuses, TAC is fully committed to its Catholic identity, its Great Books approach, and a discussion-style class format utilizing Socratic dialogue.”

“We are always happy to see a new edition of The Newman Guide— and to be included in it,” says Jon Daly, the College’s director of admissions. “It is a wonderful tool for prospective students and their parents because it highlights the unique qualities that distinguish these 15 institutions from each other.”

The Newman Guide notes that Thomas Aquinas College “the first in a wave of new Catholic colleges born from the crisis of Catholic identity in American Catholic higher education.”  Moreover, although “TAC’s success has encouraged the emergence of other faithful Catholic colleges, including some that share its emphasis on the Great Books, [it] still has the distinction of being the only Catholic college in America that teaches exclusively from these classic works of Western civilization.”