In the newly released, tenth anniversary edition of The Newman Guide to Choosing a Catholic College, the Cardinal Newman Society once again recommends Thomas Aquinas College as one of 29 Catholic institutions nationwide with a strong Catholic identity. The 2017-18 publication lauds the College for its “impressive intellectual rigor” as well as its “commitment to orthodox Catholicism.”

As signs of the College’s institutional success, the Cardinal Newman Society notes that “enrollment is the highest ever at 389,” and that, contingent upon the approval of the Massachusetts Board of Higher Education, the College plans “to open a new Massachusetts campus in 2018.” Furthermore, Thomas Aquinas College is “top-ranked and second only to Princeton University for alumni loyalty.” 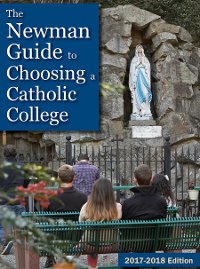 What distinguishes the Newman Guide from its secular counterparts is its emphasis on religious fidelity and spiritual vitality. Thomas Aquinas College, the guide reports, “is fully committed to its Catholic identity” and offers students a “vibrant spiritual program” that includes holy hours, regular confession, and four Masses daily. The College has been included in the guide every year since the Cardinal Newman Society released the first edition in 2007.

“We are always happy to see a new edition of The Newman Guide — and to be included in it,” says Jon Daly, the College’s director of admissions. “It is a wonderful tool for prospective students and their parents because it highlights the unique qualities that distinguish these 29 institutions from each other.”

The Newman Guide notes that Thomas Aquinas College “was the first in a wave of new Catholic colleges born from the crisis of Catholic identity in American Catholic higher education.”  Moreover, although it “has encouraged the emergence of other faithful Catholic colleges, including some that share its emphasis on the Great Books, [it] still has the distinction of being the only Catholic college in America that teaches exclusively from these classic works of Western civilization.”