President O’Reilly: “Be Thankful for All that We Have Received”

“Be Thankful for All that We Have Received”

In the Book of Genesis, we read about the brothers Jacob and Esau. It looks like Jacob steals Esau birthright, and then deceives his father into giving him the firstborn’s blessing. Esau’s reaction might be understandable: “Now Esau hated Jacob because of the blessing with which his father had blessed him” (28, v.41). Esau hated him so much that he plotted to kill Jacob, and so Jacob fled to the land of Laban, the land of his mother’s brother. After almost 20 years he is forced to flee the land of Laban because his life is again threatened, this time by Laban’s family. He plans to return home, but he fears Esau’s reaction. His fear grows when he learns that Esau is approaching him with 400 men. And that is where I want to take up the story.

Jacob cries out to God:

O God of my father Abraham and God of my father Isaac, O Lord who didst say to me ‘Return to your country and to your kindred, and I will do you good, I am not worthy of the least of all the steadfast love and all the faithfulness which thou hast shown to thy servant (Gen., 32, v.9-10). 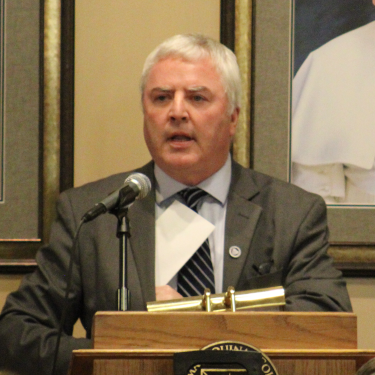 Cardinal Newman once gave a sermon which began by citing these words from Jacob. He points out that Jacob has recognized two things in this passage: 1) He acknowledges his unworthiness of God’s steadfast love, and 2) he knows that he has received many blessings in the past. According to Newman, acknowledging these two things prepares Jacob for proper gratitude to God. In fact, Newman goes further: Just as Abraham is our model of faith, so Jacob is a model of gratitude.

As Cardinal Newman puts it:

The spirit of humble thankfulness for past mercies which [Jacob’s] words imply, is a grace to which we are especially called” (Sermon 6, “Remembrance of past mercies).

Jacob has come to realize that he is not deserving of all the good things that God has given him. He looked back on those past blessings and marveled “at the contrast between what he was in himself and what God had been to him” (Sermon 6). Newman argues that these two movements of the soul, recognizing one’s unworthiness while at the same time acknowledging the goods that one has received, should cause the believer, and most of all the Christian, to respond with gratitude.

A comparison of Jacob and Abraham might elucidate more how Jacob is a model of gratitude. As St. Paul puts it, “Abraham believed God, and it was reckoned to him as righteousness” (Romans: 4, v. 3). And later, “So you see that it is men of faith who are sons of Abraham” (Galatians: 3, v. 7). Abraham is the “pattern of faith ... he could realize and make present to himself things unseen … He followed God in the dark as promptly, as firmly … as if he were in broad daylight” (Sermon 6). Newman suggests that the “faith in which Abraham excelled was not Jacob’s characteristic excellence.” He does not mean by that that Jacob did not have faith, in fact, Newman agrees with St. Augustine that Jacob is acting without guile in the incident of the birthright, although Newman goes further. Newman argues that Jacob’s buying of the birthright from Esau, and gaining the blessing from Isaac, were “proofs of faith.” But Jacob’s faith is imperfect.

Jacob is revealed as having anxiety and fear about what is to come. One sees that in his plea to God: “If God will be with me and will keep me in this way that I go and will give me bread to eat and clothing to wear, so that I come again to my father’s house in peace, then the Lord shall be my God” (Genesis: 28, v. 20-21).

So, Abraham’s distinguishing grace is faith, but Jacob falls short of faith in the passage just quoted. However, Jacob is a model for gratitude.

Newman puts it this way:

Abraham appears ever to have been looking forward in hope, Jacob looking back in memory: the one rejoicing in the future, the other in the past … the one making his way towards the promises, the other musing over their fulfillment.

What, then, does Jacob teach us? If we look to the good things we have received, if we reflect that we are not worthy of those things, because they have been given to us not earned by us, then we must give thanks.

It is obvious that piety toward our parents and our country is a virtue. Without parents we would not have life or any of the blessings consequent on life. Without prudent founding fathers, we would not have the blessings of liberty and many common goods. Of course, all the blessings we receive from parents and country are ultimately due to God, none of them are principally due to ourselves. To fail to recognize that, to fail to have the appropriate love for the source of our blessings, leads to presumption.

St. Thomas says that we fail to be grateful not usually by excess but by defect. One can fail to be temperate by eating too little, but usually the failure is to excess. But with gratitude we do not fail by being excessive but by defect. St. Thomas continues: “The first degree of ingratitude is when a man fails to give return for a favor, the second when he declines to … indicate that he has received a favor, while the third … is when a man fails to recognize the reception of a favor” (Summa, II-II Q. 107, A.2).

It is this last defect, the failure to recognize that one has received a blessing, that is the greatest act of ingratitude. It can come over us when we compare the goods that we have received with others. Because others have been more blessed than we have, we might fail to recognize the favors we have received. I think that fault is manifested in the parable of the householder who hires laborers throughout the day, only to have those who were first hired complain about the wages they agreed to earlier, because they see the householder’s kindness to those hired late, and they resent it.

If we see the good that we have received as something we deserve, and due to our efforts, we will be in danger of presumption. Further, if the consideration of justice is the principal way we relate to our benefactors, and especially to God, we would have to forfeit any claim for what is our due. With God we should not ask for what we deserve. But if we accept the good received as a mercy, then we will not be presumptuous but grateful. And that is how Jacob serves as a model for us.

One way to acquire the virtue of gratitude, then, is, as Newman puts it, “to gain a truer view of what we are, and where we are, in [God’s] kingdom … Let us thankfully commemorate the many mercies He has vouchsafed to us in the past” (Sermon 6).

So let us recommit today to be thankful for all that we have received. To quote the prophet Isaiah: