Throughout the year, the College hosts representatives of various religious orders and movements within the Church to speak to students about vocations to the priesthood or religious life. The start of April has been an exceptionally busy time for such events, with three groups visiting campus.

Sr. Mary Margaret O’Brien, O.P. (’00)On April 2, Sr. Mary Margaret of the Dominican Sisters of Mary, Mother of the Eucharist, met in St. Albert Hall with women who may be contemplating religious vocations. The Dominican Sisters are a thriving order situated in Ann Arbor, Mich. Sr. Mary Margaret O’Brien, O.P. (’00), one of four alumnae who belong to the Order, told students her vocation story, emphasizing how her time at the College prepared her for the religious life. She also discussed the order’s charism of teaching and learning, balanced out by a vibrant prayer life. 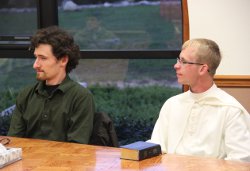 Meanwhile, just upstairs from the women’s meeting, a group of the College’s men met with visiting Norbertine priests and seminarians from St. Michael’s Abbey in Orange, Calif. The principle work of the Norbertine Fathers is running a seminary and a boarding school, but they also assist at parishes and schools in the surrounding area. There are currently nine Thomas Aquinas College alumni serving as priests, brothers, and seminarians in the community. 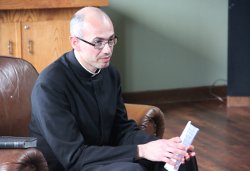 Finally, two days later Rev. Giuseppe Cordomone and Deacon Paul of the Missionary Servants of the Poor of the Third World gathered with students in the student lounge of St. Joseph Commons. The Missionary Servants are a movement in the Church based in Cuzco, Peru. Fr. Cordomone and Deacon Paul spoke about their ministry, stressing that men grow in their relationships with Christ when they serve the poor, because the poor are close to Christ.

Historically about 10 percent of the College’s graduates enter the priesthood or religious life. Five members of last year’s 91-member graduating class, for example, have already entered seminaries or religious orders, and Head Chaplain Rev. Joseph Illo anticipates that several current students will follow suit. “Usually we will get about 15-20 students at each one of the vocations presentations, which is a good, healthy number,” he reports. “Vocations directors love to come to the College for that reason.”