The final days of the Lenten season were a solemn, prayerful, and ultimately joyful time at Thomas Aquinas College. On both campuses, students attended silent retreats which stretched from Wednesday evening of Holy Week to the end of the day on Holy Saturday. The experience featured several conferences focusing on the Passion and Resurrection of Our Lord as well as the surpassingly beautiful Triduum liturgies. In New England, two members of the Canons of the Holy Cross led the retreat, and the California campus welcomed a Norbertine father from the nearby St. Michael’s Abbey. 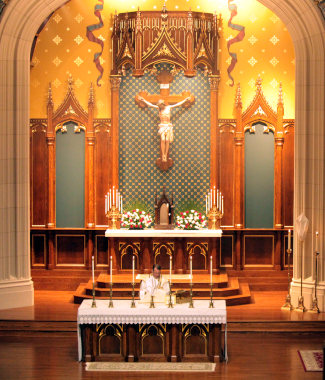 Each day of the Triduum pivoted around the solemn liturgies of Thursday evening, Friday afternoon, and Saturday night. The foot washing and Eucharistic processions commemorating the Institution of the Eucharist on Thursday gave way to three-hour vigils with the Blessed Sacrament, which led into Good Friday, with its bare altars and the stark veneration of the Cross. A mixture of sorrow and expectation pervaded the chapels until late Saturday night, when the Resurrection was triumphantly welcomed with the Solemn Easter Vigil. Afterward, students enjoyed enormous feasts, and many stayed awake the entire night to witness the sunrise on Easter morning.

One of the many striking ceremonies during this time was the ancient rite of Tenebrae, in which students chanted parts of both Matins and Lauds for Holy Thursday, Good Friday, and Holy Saturday. In both chapels, as each psalm ended, a candle was extinguished, and after the final psalm, the only remaining lit candle was taken into a side room, leaving the building in complete darkness. The office then culminated with the strepitus, when the congregations repeatedly struck the pews to symbolize the earthquake that occurred when Our Lord died. After a few moments, servers reemerged with the candles, at the sight of which the noise ceased, and the chapels emptied in silence.

“It was just a very powerful prayer in the dark church with candlelight,” remarks New England sophomore John Metilly. “It really made me think of the Passion, and the atmosphere set the mood of focusing on Our Lord’s suffering and Passion, especially the Agony in the Garden and the death on the Cross.”

Through these and many similar occasions, students enjoyed their intense preparation for the Easter Solemnity. “The silent retreat was beneficial to me in that … it gave me a lot of time to really meditate on the Passion and focus on prayer,” John continues. “Rather than having all my energies spent on external things, talking to people and interacting, I could really turn into myself and meditate on the mysteries of Holy Week.”