Ever since its founding, Thomas Aquinas College has been committed to upholding Catholic social teaching in all of its policies and practices. It has sought, for example, to consistently obey the civil law, to provide suitable wages and benefits to its employees and their families, and to honor the Church’s teachings on marriage and sexuality. In keeping with these commitments, on Friday, September 20, the College filed a complaint against the U. S. government (PDF) in the United States District Court for the District of Columbia. (Read the complaint and the plaintiffs’ brief in support of the preliminary injunction.)

The complaint alleges that the HHS mandate that compels all employers — even Catholic ones — to provide contraceptive, abortifacient, and sterilization coverage to their employees violates the First Amendment of the U.S. Constitution and the Religious Freedom Restoration Act. Specifically, the complaint argues, the policy substantially burdens the free exercise of religion without a compelling governmental interest. Further, by requiring employers with religiously motivated objections to provide morally problematic coverage, the mandate also violates the Administrative Procedures Act.

Represented by the Jones Day law firm, the College and its co-plaintiffs — the Roman Catholic Archbishop of Washington, The Catholic University of America, and others — are seeking a permanent injunction that would relieve them of the mandate’s unjust requirements and severe penalties. The plaintiffs are additionally asking for the court to vacate the mandate altogether, in light of the Constitutional issues involved and the obvious threat posed to religious liberty.

This direct legal action comes nearly two years after U.S. Secretary of Health and Human Services Kathleen Sebelius announced the mandate as part of the Affordable Care Act. Since then, the College has taken every possible action short of litigation to resist the measure, filing formal complaints with the appropriate agencies and issuing a direct appeal to President Obama. Regrettably, these protests have gone ignored.

The courts have dismissed most early lawsuits against the mandate due to a lack of “ripeness” or timeliness, either because the mandate had not yet taken effect, or because the Obama Administration was still modifying it. “With the Administration having finalized the law in August, we are certain that now is the time to act, because the mandate remains unsupportable,” says the College’s general counsel, J. Quincy Masteller. “With all that is at stake — for both the Catholic character and the financial viability of the College — we really have no other choice.”

“It is important for a Catholic educational institution such as Thomas Aquinas College to bear witness to its Catholic character by challenging measures that create a conflict between its duties to uphold the tenets of Catholic social teaching and obey the civil law,” says President Michael F. McLean. 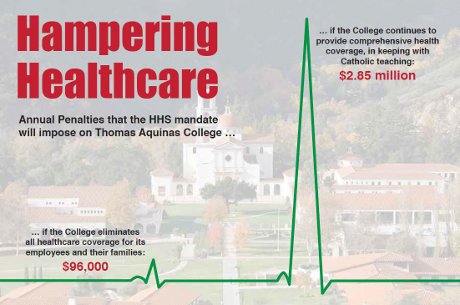 This dilemma is both ethical and financial. The HHS mandate carries stiff, potentially ruinous penalties. “If the College were to avoid the mandate by simply refusing to offer health coverage, we would have to pay an annual penalty of $2,000 per employee over the first 30 employees, or $96,000 a year,” explains Mr. Masteller. “But if we were to continue providing health insurance without coverage for contraception, sterilization, and abortion-causing drugs, we would face penalties of $100 a day for each of our 78 employees — or $2.85 million a year, which we simply cannot afford. The law effectively demands that we either violate our Catholic conscience or deny health coverage to our employees and their families.”

“It is imperative that the College work to overturn measures that seriously threaten our catholic identity and our financial stability,” adds President McLean. “After consulting with members of the Board of Governors, the faculty, and our bishop, the Most Rev. José H. Gomez, it became clear that we must oppose this measure by any legal means possible. Left unchallenged, the mandate would compel us to choose one of three options that we cannot abide: disobey the civil law, do not provide healthcare for our employees’ families, or pay for medications and procedures that are contrary to Catholic moral teaching.”

For prudential reasons, the College opted to pursue litigation in the D.C. District Court rather than in California’s own Ninth Circuit. “We are very pleased that the Archdiocese of Washington, D.C., the Catholic University of America, and the other plaintiffs have welcomed our participation,” notes Dr. McLean. “It is heartening to see Catholic institutions come together in defense of the Faith.”

A Time for Prayer

Shortly after the terms of the HHS Mandate became known, the College began a period of spiritual fortification. At the conclusion of every Mass in Our Lady of the Most Holy Trinity Chapel, the congregation says the Prayer to St. Michael, seeking the Archangel’s intercession in this legal and political struggle. “I encourage our friends everywhere to join our students and faculty in reciting daily the prayer to St. Michael the Archangel,” says Dr. McLean, “that we might be victorious in this effort.”