The latest speaker in the Office of Career Advisement’s series of career talks was Catholic television host and producer Daniel Rabourdin, who on Tuesday offered practical advice and encouragement to students who are interested in pursuing careers in film and television. “Start now as a hobby. “Make little movies, right now. Write little scripts, right now,” Mr. Rabourdin urged. “Volunteer to work for free. Fortunately, we are close to where it all happens in Hollywood. Develop those skills, the writing and editing.” 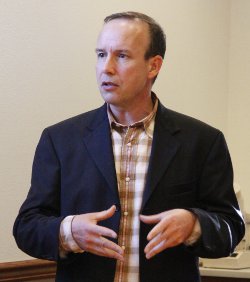 An independent producer with a master’s degree in Thomistic philosophy from La Sorbonne, Mr. Rabourdin has hosted and produced more than 25 reality TV shows and documentaries with EWTN Studios. His work has led him around the world, from Poland to the Amazon. His most recent production took him to his native France, where he shot The Hidden Rebellion, a docudrama about the persecution of Catholics during the French Revolution, which is now in its final stages of post-production.

Among this year’s other career events have been presentations about business, medicine, architecture, nursing, and business and technology, as well as a recent career strategies workshop. On Sunday the office will host a talk by alumnus attorney Tim Cantu (’10), who will discuss the legal industry and the law-school admissions process.

“Having developed the skills of critical thinking and clear communication, our graduates are well prepared to pursue any vocation or career,” says Director of Student Services Mark Kretschmer. “These talks give our students a taste of the many options that lie before them, and the networking and know-how necessary to thrive in a competitive marketplace.”